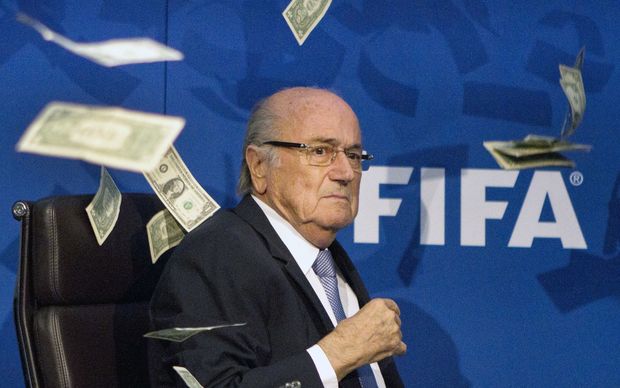 Dollar bills rain down on FIFA president Sepp Blatter, at a media conference in Zurich. A man posing as a journalist had thrown the money at him. Photo: Photosport

FIFA also announced it lost 178 million dollars last year, its first deficit since 2002, mainly due to the costs involved as it battled against the worst graft scandal in its history.

"The unprecedented events that occurred in 2015 have impacted upon FIFA's financial results however the organisation's healthy reserves have allowed it to weather the storm," the Swiss-based group said in a statement.

Several dozen officials, including former members of FIFA's executive committee, have been indicted in the United States while Blatter has been banned for six years by the ruling body's ethics committee.

Meanwhile Blatter has lodged an appeal against his six-year ban from football for ethics violations, the Court of Arbitration for Sport (CAS) announced.

The Lausanne-based organisation said the 80-year-old Swiss wanted to overturn last month's decision by the appeals committee of FIFA.

Blatter and Michel Platini, president of European football's governing body UEFA, were banned over a payment of three million dollars made by FIFA to the Frenchman in 2011, with Blatter's approval, for work done a decade earlier.

Both men have denied any wrong-doing.

Blatter has vowed to "go to the end of my life to show that I'm innocent".

Platini filed a similar appeal against his suspension earlier this month.

CAS said Blatter and FIFA's appeals committee would exchange written submissions, with a three-arbitrator panel to be created before a hearing is held.

FIFA is seeking to turn the page on a long-running scandal that escalated in 2015 when police swooped on a luxury Zurich hotel to arrest soccer officials accused by U.S. federal prosecutors of corruption.

Dozens of people have since been charged in investigations that have spanned five continents.

Swiss Gianni Infantino, the former UEFA general secretary, was elected president of FIFA last month and pledged to refocus the organisation on soccer rather than corruption and litigation.