NSW Waratahs won't stand in Kurtley Beale's way as odds firm on the Wallabies' star backline utility packing his bags for Europe at the end of the Super Rugby season. 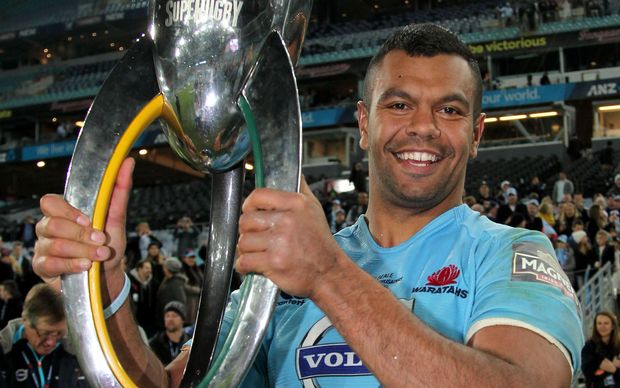 Beale is weighing up a $3 million offer to join London Wasps for two years, a deal neither the Waratahs or Australian Rugby Union can match.

Waratahs and Wallabies defence coach Nathan Grey says the decision is entirely Beale's but believes the 27-year-old - now a 60-Test veteran - is mature enough to cope overseas after a turbulent career dogged by off-field controversies.

Beale openly admitted when he returned to Sydney in 2014 after an ill-fated two-season stint with the Melbourne Rebels that he welcomed his family support to help keep him on track.

"Everyone's different when they go overseas," Grey said ahead of the Waratahs' hosting of Super Rugby champions the Highlanders on Friday night.

"Having lived in Japan for five years personally and knowing a number of people who do travel overseas, it's a case-by-case situation.

"But he's a strong young man and he's someone who would handle that without a problem."

Grey, though, admits losing Beale - who would remain eligible for Wallabies selection after reaching the 60-Test criteria during last year's Rugby World Cup - would be a huge blow for the Waratahs.

"But that's the landscape of international rugby these days," Grey said.

"Those opportunities present themselves for KB and if him and his family and his management decide that that's the best for him, we'd be very supportive of him.

"He's been an outstanding contributor to the Waratahs and Australian rugby over a number of years.

"No doubt he's going to continue doing that for the 2016 season so I'm looking forward to working with him."

Beale also has the backing of code-hopping team-mate Israel Folau.

"All that stuff is Kurtley's business and for us, as players around him, we've got nothing to do with that," Folau said.

"He's got his management to deal with that and I think his mindset is definitely on the game on Friday."

Grey says regardless of what lay ahead, Beale's focus is very much on the here and now for the Waratahs.

"He's been probably our most consistent trainer throughout the pre-season leading into the first couple of rounds," Grey said.

"So there's no doubt in terms of his commitment to the Waratahs.