Liverpool handed their fiercest rivals a painful lesson with a dominant 2-0 win over Manchester United in the first leg of a Europa League last-16 clash at Anfield. 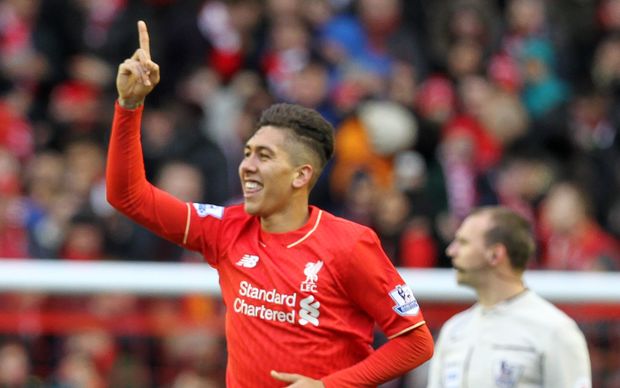 As the two sides took their bitter domestic rivalry on to the European stage for the first time, a penalty from Daniel Sturridge and a second-half effort from Roberto Firmino gave Liverpool a commanding advantage to take into next week's return leg.

Juergen Klopp's team are well placed to progress along with the German coach's former club Borussia Dortmund who underlined their status as favourites with a masterclass show against Tottenham Hotspur.

Dortmund's Marco Reus scored twice in the second half, after Pierre-Emerick Aubameyang had given them a 30th-minute lead, in a classy 3-0 victory over a Spurs side who rested a number of players with one eye on their Premier League title challenge.

Shakhtar Donetsk will also take a good lead into the second leg with Anderlecht after a 3-1 home victory, as will Villarreal who beat Bayer Leverkusen 2-0 thanks to a double strike from Cedric Bakambu.

Sevilla's Steven N'Zonzi was sent off with three minutes to go as the holders, bidding for a third straight trophy, drew 0-0 at Basel while Athletic Bilbao beat Spanish rivals Valencia 1-0 with a 20th-minute goal from Raul Garcia.

Liverpool's rivalry with United stretches back over 122 years but the 195th meeting between the pair was the first in Europe.

The encounter, played at a simmering Anfield, was fast and furious. It was Liverpool who were in control and they would have won more emphatically if it were not for a string of brilliant saves from United keeper David De Gea.

Klopp's side, bidding to avoid a club record fifth successive defeat to United, went ahead in the 20th minute when Nathaniel Clyne was tugged back by Memphis Depay and Sturridge finished from the penalty spot.

De Gea kept the visitors in the tie with stops to deny Sturridge, Adam Lallana and Philippe Coutinho on two occasions but he was powerless to prevent Firmino converting from close range with 17 minutes remaining.

"We were really good from the first second, everything was there but we could have scored more," a beaming Klopp told BT Sport.

The match in Dortmund promised to be an exciting fixture featuring the second-place sides in the Bundesliga and the Premier League.

Some of the gloss was taken off the clash, however, when Tottenham boss Mauricio Pochettino chose to make seven changes to the side that had played at the weekend.

The game also promised to pit two of Europe's leading marksmen against each other, a spectacle that was denied for the majority of the tie as Spurs left leading scorer Harry Kane on the bench until late in the second half.

That left Dortmund's Aubameyang as the leading attraction and the Gabon striker, who has scored 22 times in the Bundesliga this season, lived up to his billing.

He had a goal disallowed for offside before breaking the deadlock by heading a Marcel Schmelzer cross accurately past keeper Hugo Lloris and into the bottom corner.

It was largely one-way traffic but Spurs stayed resolute at the back until Reus scored twice in nine minutes after the break.

His first came from a corner when he lashed the ball into the net on the volley at the far post while the second was a sidefooted finish from close range after a perfectly-weighted pass from Gonzalo Castro.

"There was a lot of speed in the game in the first half and in the second we were able to move up higher and dominate completely," said Dortmund boss Thomas Tuchel.

Fenerbahce's tie against Braga looked destined to end goalless until Mehmet Topal curled in a superb effort from the edge of the area with eight minutes remaining to secure a 1-0 win.

Sparta Prague took the lead against Lazio through Martin Frydek but the Italians replied through Marco Parolo to grab a 1-1 draw in Poland.