A hat-trick from Hugo Inglis has helped the New Zealand men's hockey team to a 4-2 win over Malaysia in the third test at Blake Park in Tauranga. 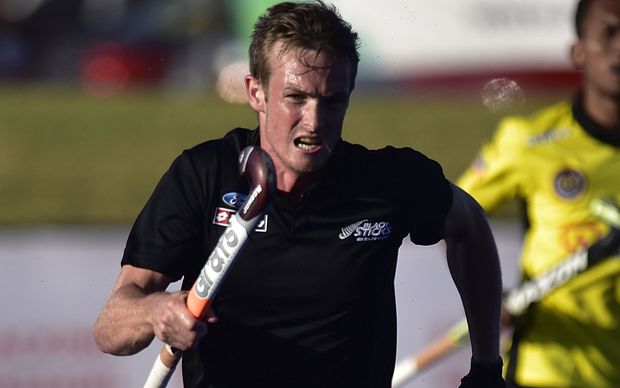 Hugo Inglis of the Black Sticks chases after the ball. Photo: PHOTOSPORT

Trailing by a goal in the second half, Inglis scored three goals in the final 20 minutes to lift the Black Sticks to a 2-1 lead in the four test series.

Head coach Colin Batch said it was another tough game against a Malaysian side who are playing at a higher level than their world ranking of 13th.

"One of the things we wanted to do was start the game better and we did that - our first goal was very good," Batch said.

"Credit to Malaysia it was a struggle to win the game and they are a very competitive side. They're testing us in ways we want to be tested going forward.

"In this series we are putting ourselves through difficult situations. We learnt a lot from the second test and it was good to come through with a win tonight."

The Black Sticks made a strong start and found themselves leading in just the second minute after James Coughlan delivered a stinging reverse shot past the goalkeeper.

New Zealand held the majority of possession in the first half but Malaysia scored against the run of play just out from halftime when Rashid Baharom controlled a long overhead before slipping the ball past Devon Manchester's pads.

With the game locked at 1-1 it was Malaysia who were next to strike after being awarded a stroke five minutes into the third quarter, Fitri Saari finding the goal.

Just out from three quarter time Inglis levelled the score once again when he got the final touch on a penalty corner play which saw Nic Woods slip a precision pass to the right post.

With less than two minutes on the clock the Black Sticks were awarded a stroke when Nick Wilson was chopped down from behind in the circle, with Inglis obliging from the spot.

Straight off the restart it was Inglis again who put the result beyond doubt, going on a breakaway run thanks to a pass from Wilson and slipping the ball over the goalkeeper.

The Black Sticks play the fourth and final test against Malaysia tonight.

Following this series the Black Sticks head north to Auckland to prepare for four tests against Korea.