A fraction of a second has separated New Zealand's Eddie Dawkins from his second gold medal at the Track Cycling World Championships in London. 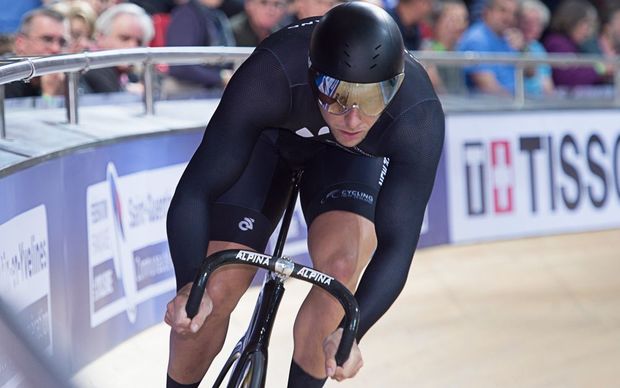 The Southlander took silver in this morning's final of the men's keirin, finishing within a blink of German winner Joachim Eilers.

A powerful victory push over the closing metres from Dawkins forced officials to conduct close analysis of the photo finish.

Dawkins also came second in the Keirin at last year's world champs and won gold in the team sprint with Ethan Mitchell and Saw Webster earlier at this year's event in London.

The outcome was deja vu for the New Zealander, who also powered home late at last year's world championships in Paris, where he was denied by less than 0.1sec by Frenchman Francois Pervis.

Dawkins was New Zealand's most successful rider at the five-day meet, his last-lap prowess helping power New Zealand to victory in the final of the men's team sprint on Wednesday, alongside Sam Webster and Ethan Mitchell.

Webster won his first round keirin heat before failing to advance to the semi-finals.

Dawkins placed second in both races, doing enough to reach to the six-man decider.

New Zealand finished sixth equal on the medal table with one gold and one silver.

At last year's World Champs in Paris they were fifth with one gold, two silvers and a bronze.

Natasha Hansen was eliminated in the quarter-finals of the women's sprint, beaten by German defending champion Kristina Vogel.

Lauren Ellis improved on the second day of the women's omnium to finish eighth in the five-discipline event while Pieter Bulling and Luke Mudgway were 11th in the men's madison won by high-profile British pair Bradley Wiggins and Mark Cavendish.