Despite failing to hold on to their title in the NBL grand final last night, the New Zealand Breakers assistant coach Paul Henare says he's extremely proud of their season. 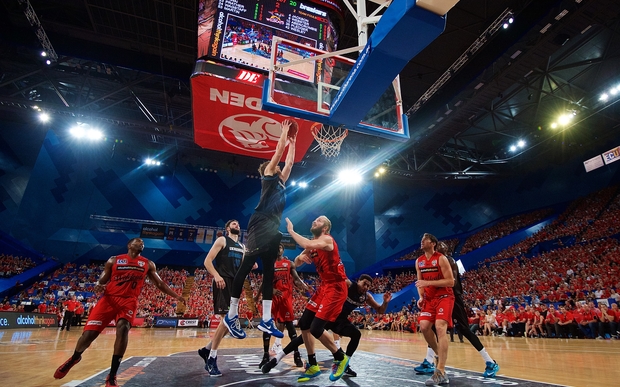 Thomas Abercrombie of the New Zealand Breakers drives for a dunk. Photo: PHOTOSPORT

The Breakers lost 75-52 to the Perth Wildcats last night in Perth.

The defending champions forced a third and deciding match in the grand final series on Friday, with a four point victory over the Wildcats in Albany.

But they never really fired in the decider last night, missing out on a 5th Australian title.

Assistant coach Paul Henare said they just couldn't get any flow on attack.

"We had some decent looks throughout the game and Perth's pressure had an effect on how our things flowed and obviously we just couldn't get going."

He said their energy levels were as good as they were ever going to be.

"You know it wasn't through lack of effort or wanting to play the right way but to be honest we just got beaten by a better team, you know they were better than us. they wanted it, they were more desperate, and as much as it hurts to say, that's what it came down to."

Henare, who will step into to the role of head coach next season, said he was proud of the Breakers' season overall.

"This group has been absolutely tremendous all year in terms of dealing with different scenarios, and situations and words and rumours and all kinds of shit that was thrown at us and for us to stick through everything and stick together as a group. I'm just extremely proud of everything this team has achieved this year."

He said Dean Vickerman had been prolific in his three years at the helm and had left the team in a good position.

"I can't speak highly enough of Dino and what he's done for this club, the players, everyone around him, he's just always looking out, he's caring about everybody and on a personal level obviously he's created some exciting opportunities for myself. For him to win one grand final and get to another in such a short amount of time was just an outstanding effort."