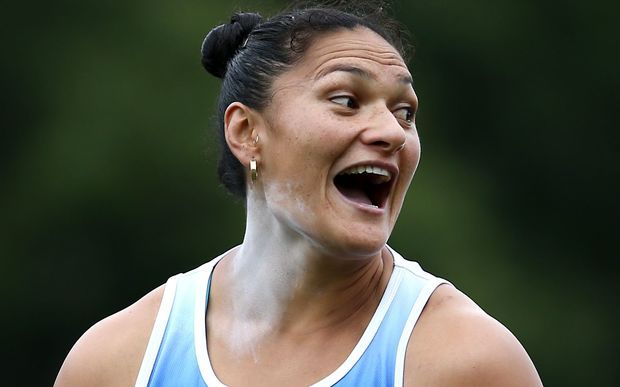 Valerie Adams reacts to her winning throw at the NZ track and field champs., 2016. Photo: PHOTOSPORT

Competing at the New Zealand track and field championships in Dunedin, Adams seemed untroubled by the career threatening injury that blighted her 2015 season after being named the IAAF world athlete of the year in 2014.

Following recent shoulder, elbow and knee surgeries, the 32-year-old told Fairfax she was feeling anxious before the championships, but glad to get "more competition under her belt."

She tweeted that her next event would be the Portland indoor world championships later in March.

Her title winning distance eclipsed the best throw by any athlete so far in 2016, a mark of 18.85 metres also set by Adams last month in Tauranga.

Her Olympic winning effort in London was 20.70 metres, while her personnal best of 21.24 metres was achieved in 2011.

The 25-year-old American, Kasandra Vegas, and the 19 year old Cantabrian, Lauren Bruce, were the other competitiors in the final at the Caledonian ground.