The Warriors have been beaten 34-26 by Wests Tigers in their opening match of the National Rugby League season at Sydney. 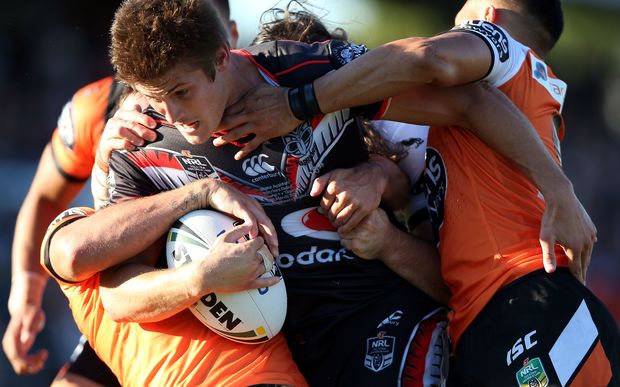 The Tigers outscored the Warriors five tries to one in the first half to lead 28-4 at the break before the Warriors mounted a comeback.

The visitors scored four second half tries and closed the gap to just two points, before the Tigers crossed the line a minute from full time to make sure of the victory.

The defeat continues an embarrassing losing streak for the Warriors who haven't had a first round win in the NRL since 2009.

"It's not acceptable to start a game like that," McFadden said.

"We fought back and got ourselves into it. If it wasn't for a couple of pretty poor errors at the end, we might have been able to sneak home with it. But it wasn't to be and we've got to learn from it."

"It was a cliché game of two halves. We were really passive in the first half I thought, and they won the physical battle," he said.

"We sort of didn't match up with them there. Some consolation is that we managed to find a bit of energy and some purpose in the second half. I think at the very least we'll get a bit of confidence out of that.

"It's a mindset thing. We obviously got some momentum and momentum at this time of year is pretty critical. Once we got going it what hard to stop, just like they were in the first half."