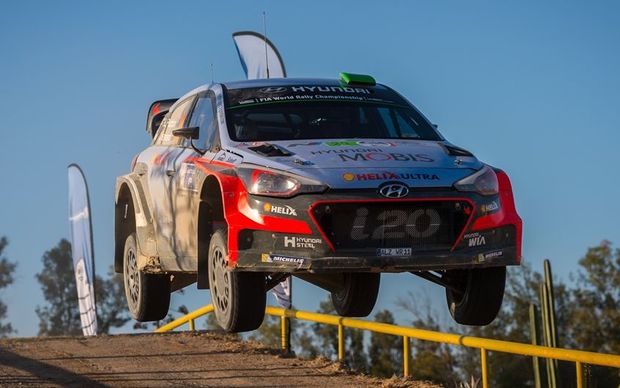 Yesterday Paddon damaged his Hyundai's suspension after swiping a wall and burned his hand while making repairs.

On yesterday's last gravel stage, he also slid into a ditch after his car mysteriously filled with dust in the final mountain stage.

Despite the set-backs Paddon and his co-driver John Kennard achieved a top three stage time on their second run through the day's longest stage, El Chocolate, as well as the fourth quickest time through the following test.

"We always knew this rally was going to be challenging and it certainly thrown up a few challenges today," said Paddon

"I probably made it difficult for myself by going with the wrong tyre choice this morning, going for the hard compound when soft was the best choice so we lost a bit of time there. Then we broke a suspension arm when we slightly hit a bridge on the following stage and lost another 30 seconds, so it was a tough morning.

"This afternoon has been better, we got the tyre choice right, but still just some little issues inside the car. Little technical problems which you can expect with a new car like this on gravel for the first time. We'll press the reset button tonight. The position's still okay, we're in the top five, but I obviously want to improve to we'll work on that tomorrow."