A last-gasp try by Savelio Ropati earned Samoa a thrilling 28-24 victory over their Pacific rivals in the most entertaining encounter at Sam Boyd Stadium, just off the Las Vegas Strip.

England had a poor day and came perilously close to being on the receiving end of an upset when they trailed Japan 19-5 with less than two minutes left in their Pool B opener.

They battled back with two tries, however, the second converted after the buzzer by Tom Mitchell to secure a dramatic 19-19 draw.

There was to be no comeback in their second match against Scotland and Joe Nayacavou scored a late try to seal a 24-14 win in the final action of the day to put the English out of contention for the Cup.

New Zealand, who won the inaugural Sydney Sevens earlier this month, were in cruise control in front of 18,441 fans in the desert gambling capital as they powered past Portugal 42-7 and Russia 38-0 to take a stranglehold on Pool A. 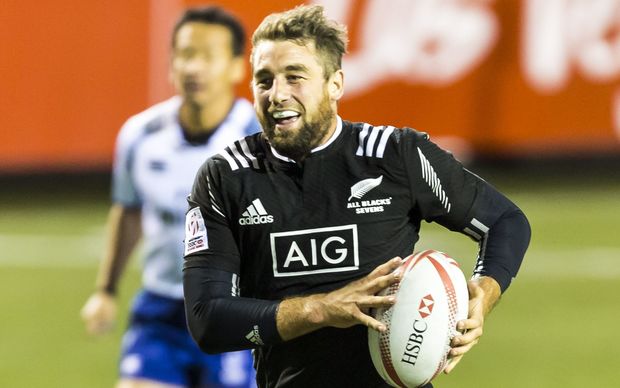 Kurt Baker smiles as he scores against Russia. Photo: PHOTOSPORT

Prolific winger Bryan Habana, South Africa's leading try-scorer in tests with 64, made a successful return to sevens after a 12-year absence as the Springboks recorded lop-sided wins against Canada and Wales in pool D.

Australia launched their title bid in pool B with a 26-0 demolition of Scotland that included the long-awaited sevens debut for flyhalf Quade Cooper, who has represented the Wallabies 58 times in the 15-man version of the game.

Cooper, 27, came on as a substitute with just under five minutes left, but his first few touches of the ball resulted in wayward passes as he initially struggled to adjust to the shortened format.

Another "no look" pass failed to go to hand in the later 33-5 victory over Japan but Cooper did notch his first points with four conversions.

Carlin Isles, the "fastest man in rugby", and fellow speedster Perry Baker both showed off their raw pace as the United States notched a 19-12 win against Wales followed by an error-prone 26-26 draw with Canada in pool D.

The Las Vegas event is the fifth stop on the 10-tournament World Series circuit. The teams then head to Vancouver, Hong Kong, Singapore, Paris and London over the coming months.

South Africa, Fiji and New Zealand are currently equal on points at the top of the series' standings.