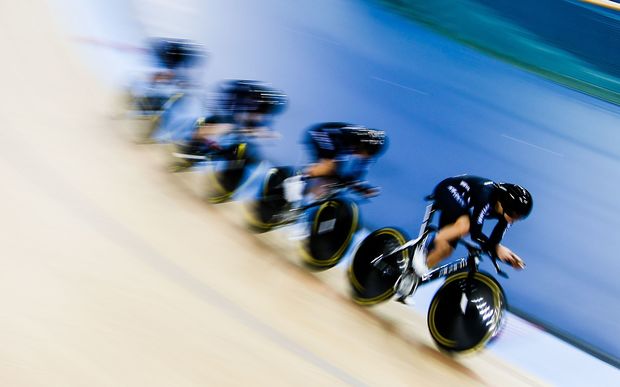 The Kiwi quartet of Lauren Ellis, Rushlee Buchanan, Jaime Nielsen and Racquel Sheath had earlier in their first round match up with Canada taken more than two seconds off their national record set in the qualifying yesterday in 4:18.264.

But agonisingly they lost out by just 3/1000ths of a second to their Canadian rivals for a spot in the final.

In this morning's bronze medal ride-off, the Kiwis could not quite repeat their first round performance as they had to play second fiddle to a revitalised Great Britain team, who had struggled during yesterday's qualification session.

The team in black trailed the host nation from the outset and the British secured bronze in a time of 4:16.540, which was faster than the gold medal winning effort. New Zealand, however, produced another top quality ride clocking the second fastest time in their history of 4:20.225.

Despite just missing out on a podium spot here in London the Kiwis are hugely encouraged that they can make a serious assault on the medal podium in Rio. They twice set a national record at the London Velodrome and produced the three quickest times in their history. The team also finished within the blink of an eye of a place in the final.

"We are pretty excited by the times we did and we are still making gains," said Rushlee Buchanan

"It is exciting to see that we are so close compared to past World Championships when we were a few more seconds back to where we are now.

"We know we can do more and that we are still learning with Brendon Cameron (coach) on board we are trying new things and it is paying off. We are very excited about the next few months and in Rio we are going to push harder."

The USA defeated Canada in the final, clocking a time of 4:16:802. Canada posted 4:19.525. A further measure of the rising quality of the women's team pursuit is defending champions Australia wound up fifth.

Sam Webster is through to the quarterfinals of the men's sprint. Both he and Eddie Dawkins qualified in 9.907s and 9.939s, respectively, and both won their first round

Both lost in the second round with Webster winning his repechage to move into the best-of-three race quarter-finals. Dawkins missed out in his repechage.

Dylan Kennett finished seventh in the individual pursuit in 4:19.992.

In the six-discipline omnium, former world champion Aaron Gate sits 20th overnight. He failed to finish the scratch race, but later finished fifth in the individual pursuit and 14th in the elimination race.

Meanwhile young Manawatu rider Luke Mudgway failed to finish in the points race. He pushed himself up to sixth but faded in the hard-fought 40km event.