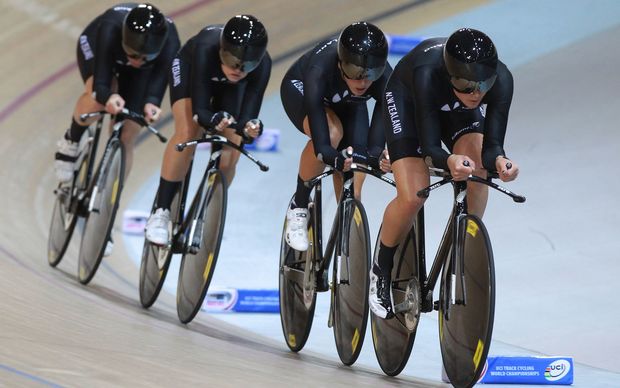 The quartet of Lauren Ellis, Rushlee Buchanan, Jaime Nielsen and Racquel Sheath rode 4:20.664, which was more than two seconds faster than the New Zealand record they set at the world championships in Paris last year.

USA topped the qualifiers on 4:16.180 with half a second covering the next four teams. The Kiwis, who were fifth fastest after the first 1000m, produced three consistent kilometre splits of 1:03 to climb to third.

They take on Canada tomorrow with the winner to progress to the gold medal ride, while USA meet Australia.

However it was extreme disappointment for the men's team pursuit who didn't have a chance to defend their world title after they were well beaten in their second round.

Neck-and-neck with rivals Australia at the 3000m mark with both teams down to three riders on plan, the New Zealanders faded when Dylan Kennett lost contact and drifted off the other two riders, Piet Bulling and Aaron Gate.

New Zealand beat the Netherlands in the ride off for seventh in the third best time of the ride-offs.

Australia beat the Bradley Wiggins-led Great Britain team in the ride off for the gold medal.

Southland's Matt Archibald finished fifth in the men's 1000m time trial on a sluggish London velodrome, clocking 1:01.718 to just miss out on a second successive podium, in the event won by Germany's Joachim Eilers after taking silver in the last two world championships.

Natasha Hansen missed out on qualifying for the semifinals in the women's keirin, finishing third in a cut-throat repecage.