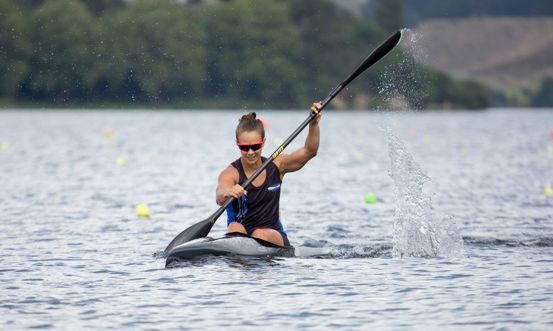 The Whakatane paddler won today's K1 500m final at the national championships at Lake Karapiro, adding to the K1 200m title she won for the eighth time yesterday.

"The competition is so strong, so to have the performance I wanted was a big relief and it's just one step towards the Olympics," Carrington said, after finishing in 1min 57.83secs, 1.73secs ahead of Hatton, with another North Shore club member Caitlin Ryan third just 0.34secs further back. "I really wanted to do well here so I put a lot of pressure on myself and I need that pressure and nerves to produce a really good performance."

"He hasn't stamped his ticket yet but he should be the entry," van Koeverden said. "He's the fastest guy in New Zealand since Ben Fouhy and Marty's possibly a bit more consistent than Ben. He's very competitive internationally."

McDowell won the recent Oceania qualifying spot, beating van Koeverden in the process in Adelaide, although he still needs to convince the New Zealand Olympic Committee he can be competitive in Rio. The pair will spend the next week training together in Auckland.

Carrington's selection is virtually assured, meanwhile, which means that her hard work has only just begun, with world cup racing on the horizon.

"This is halfway and after this, I'll settle back down and get back into the hard yards before the Olympics," she said. "It's just taking small steps and working towards that really great performance, trying every day to get better and closer to my potential."