Wales climbed to the top of the Six Nations rugby table with a 19-10 victory in Cardiff as they handed new-look France their first defeat under coach Guy Noves. 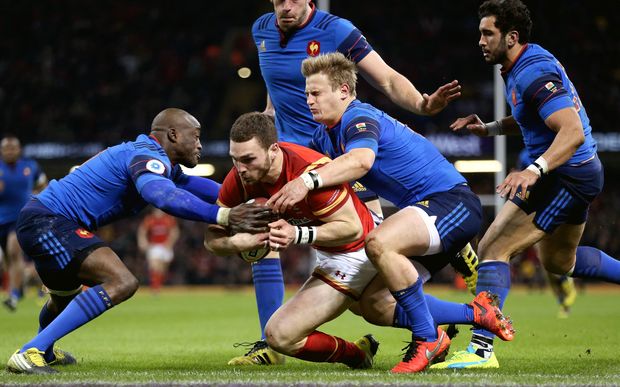 Les Bleus had a long spell of domination early in the second half but failed to make it count while the hosts proved highly efficient, prevailing with a George North try and four penalties and a conversion from Dan Biggar.

Wales have five points from two wins and a draw, one ahead of England, who take on Ireland at Twickenham tomorrow, and France.

France, with almost all of their players under 30, paid for their lack of experience despite producing some promising attacking moves, four months after being ousted in the World Cup quarter-finals following a record defeat by New Zealand.

Wales, who got off to a stuttering Six Nations start with a draw against Ireland, were rock solid in defence.

Biggar missed an early penalty and Plisson also lacked precision with the boot as both sides played it tight.

The wing put the hosts ahead after Paul Jedrasiak was penalised for a late charge on Taulupe Faletau.

Biggar added a second penalty before France stepped up a gear, going close to a try when Virimi Vakatawa broke through the midfield only for his side to be punished for going off their feet at a ruck.

Plisson halved the deficit with a routine penalty before the break before Sam Warburton and Jonathan Davies' powerful forays put the France defence to the test.

Biggar added three points when Noves' team were penalised for a dangerous tackle by Jonathan Danty.

Davies then booted the ball ahead, North made a mess of it before Plisson kicked it into the path of the wing who touched down over the line.

The visitors continued to attack but the Wales defence held firm, bundling Maxime Medard into touch after a clever Plisson diagonal kick and stopping Guirado millimetres from the line.

Wales extended their advantage with another Biggar penalty before France reduced the arrears when Guirado powered over the line in the closing stages.