Lionel Messi proved a thorn in Arsenal's side yet again as his second-half goals earned Barcelona a 2-0 win at Arsenal in the first leg of their Champions League last 16 tie. 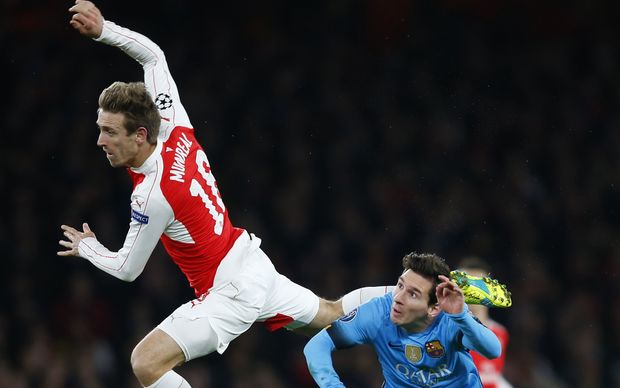 The Spanish holders' feared attack had been well shackled by a disciplined home side for much of the evening, but a lightning break after 71 minutes saw Argentine Messi teed up by Neymar to score past keeper Petr Cech for the first time in his career.

Messi, who scored four goals against the Gunners in 2010 and a double a year later in knockout round wins, doubled Barca's lead seven minutes from time when he beat Cech with a penalty, having been tripped by Arsenal substitute Mathieu Flamini.

Arsenal relied on counter-attacks and had chances, most notably from Alex Oxlade-Chamberlain and Olivier Giroud, but now have a daunting task to turn the tie around in the Nou Camp.

Juventus staged a superb comeback from two goals down to rescue a 2-2 draw against Bayern Munich in their game in Turin.

Thomas Mueller pounced on a deflected cross to put the visitors ahead in the 43rd minute and Dutchman Arjen Robben doubled the lead early in the second half before goals from Paulo Dybala and substitute Stefano Sturaro drew the hosts level.

Bayern had looked to be cruising to their third straight win at Juventus with close to 70 percent possession in the first hour.

Yet last season's finalists, who have been in superb form in recent months, refused to surrender, and staged a scintillating second-half comeback to leave the tie open after a frustrating finish for the Germans.