Eliza McCartney has added four new New Zealand records to the books at the opening of the AUT Millennium pole vault facility. 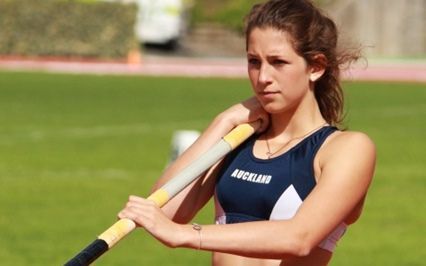 The Takapuna athlete opened at 4.25m, clearing with ease, and repeated at 4.45m where Boyd joined the fray but took three attempts to clear.

The bar moved to 4.60m where McCartney cleared on her second attempt, but the Queenslander needed another three attempts, squeaking over on her final trial at the height.

At the next height 4.71, Boyd missed her first, but the confident Kiwi was up and over with ease, landing in the new pit with a big smile on her face, the owner of four new records and matching the standard for selection for the World Indoor championships in Portland Oregon next month.

Boyd couldn't clear on her remaining two attempts at 4.71 and it was left to McCartney to have three solo attempts at 4.82, going close on her second.

Had she cleared 4.82, McCartney would have taken Boyd's Oceania record of 4.77m.

With two victories each in their four contests since the beginning of the 2016, the two will meet again on Thursday evening in a virtual decider at Douglas Track & Field, Waitakere at the Auckland Track Challenge where they will be just one of the trans-Tasman match-ups on offer as New Zealand's best take on a bevy of Australians.

The pole vault will be one of the first events on offer, starting at 6.15pm.