The Springbok wing Bryan Habana will join the South African Sevens squad today as he starts his quest to play at this year's Rio Olympics. 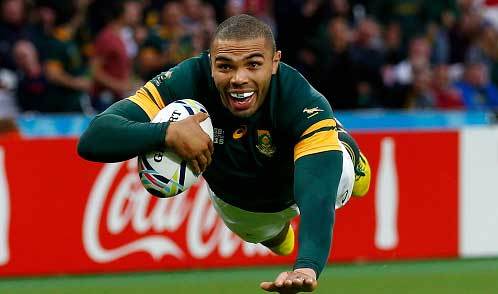 Bryan Habana scores a try for the Springboks. Photo: Getty

Habana has been given permission by his French club Toulon to join the South Africans Sevens in Stellenbosch.

Habana will be available for selection for the next two rounds of the World Rugby Sevens Series, in the USA and Canada next month.

South African Test rugby's leading try scorer made his only two Springbok Sevens appearances in 2004, in Wellington and Los Angeles, a couple of months before his Springbok Test debut.

Neil Powell, the Springbok Sevens coach, described Habana's availability for the next two rounds of the World Series as a fantastic development for his squad.

"Bryan is an unbelievable rugby player and his outstanding playing record and achievements in the Springbok jersey speaks for itself," said Powell.

"I am really excited by the prospects of him joining our training squad."

According to Powell, Habana will add something special to his already powerful squad.

"Bryan is one of those players that always has a lot of energy. Apart from that, he brings with him a lot of experience of playing rugby at the very top level, so in that sense his presence in the squad will also be a great motivational factor for our guys," added Powell.

"I can tell you Bryan is very eager to learn. He realises that it's been a very long time since he last played Sevens, but he is excited by this challenge and really looking forward to be part of our system."

Meanwhile, Powell's squad was further boosted by the return to action of four experienced players.

Kyle Brown, Branco du Preez, Cecil Africa and Justin Geduld have all returned to full training after recovering from their respective injuries.