Denny Hamlin won the Daytona 500 Nascar motor race in a photo-finish over Martin Truex Jr. to put Toyota in Victory Lane for the first time at the Great American Race. 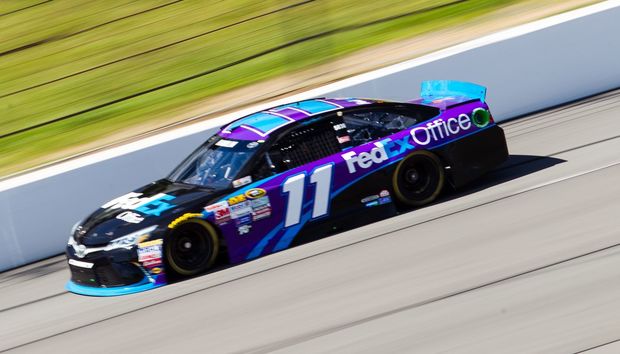 Matt Kenseth had looked poised to add his name to the short list of three-time Daytona 500 winners when he led inside the final half-lap, but instead it was his Joe Gibbs Racing team mate who passed Truex only a few feet from the finish line to claim victory by a wafer-thin 1/100th of a second, the smallest margin in the 58-year history of the race.

Kyle Busch, who gave Toyota their first NASCAR Sprint Cup drivers title last season, was third, to give the Japanese company an unprecedented sweep of the Daytona podium.

"This was a team victory. My team mates did an amazing job all day, working together," said the 35-year-old Hamlin as he celebrated his first Daytona 500 win.

"This is a proud moment for everyone at Toyota. It was my 11th try at getting the Daytona 500.

"I don't know where that came from. I don't even know what I did, but it just all came together. I just got the push."

Hamlin had led almost half the race but with one lap to go sat fourth before making a daring push to the front, brushing past 2009 and 2012 winner Kenseth, who lost control and dropped back into the pack before regaining control.

"They don't get any more crushing than that," said Kenseth. "We were unbelievably fast and that was the position I want to be in.

"I saw Denny was fast enough and I felt he was going to go around me if I didn't block him. I tried to get in front of him to get some momentum and I couldn't do it and got sideways there.

"We went for it and came up short."

With Kenseth out of contention, it was a sprint to the checkered flag and Hamlin, second in 2014 after Dale Earnhardt Jr. passed him on the final lap, erased that disappointment by going one better this time.

"I did all I thought I could do," offered Truex. "I had the lead 20 feet from the line.

"I'm really proud of that effort. He just side drafted me. I probably should have run him up a bit more, but I thought we were close enough.

"Congrats to Denny. He got me by a couple feet."

Rookie Chase Elliott, son of twice Daytona 500 winner and NASCAR Hall of Famer Bill Elliott, got his career off to a spectacular start by becoming the youngest ever Daytona pole sitter.

And the 20-year-old coolly led the 40-car field to the green flag as the massive crowd at the iconic Speedway, which underwent a 600 million dollar renovation, jumped to its feet and cheered.

Elliott, taking over the coveted seat in the Hendricks Motorsports number 24 Chevrolet left vacant when three-time Daytona champion Jeff Gordon retired at the end of last season, also brought out the first caution of the day on lap 20 of the 200 lap race when he lost control and spun into the infield, ripping the nose off the car.

With 30 laps left, pre-race favorite Earnhardt's day came to a crunching end when he slammed hard into the infield wall, bringing out the fifth caution of the day.

"We really under-estimated how important handling was going to be today," said Earnhardt. "We were starting to move forward, getting aggressive and just lost it."