FA Cup holders Arsenal's 14-match winning streak in the competition ended in a scoreless draw at home to second division leaders Hull while Championship strugglers Reading spiced up an otherwise dull afternoon in the fifth round with a shock 3-1 victory over Premier League West Bromwich Albion. 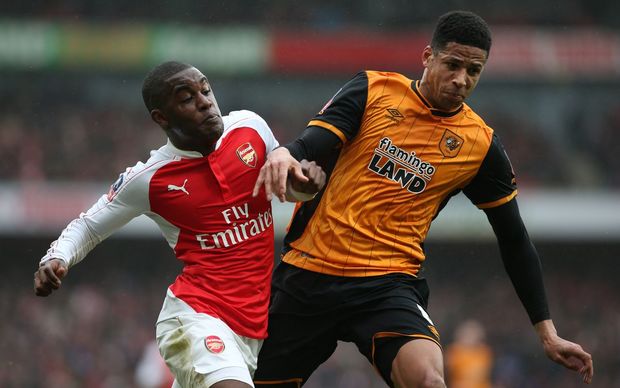 Top-flight Watford were also up against Championship opposition in Leeds United and edged a dour game 1-0 to reach the quarter-finals for the first time in nine years.

In the day's only all-Premier League clash, Everton won 2-0 at Bournemouth, Ross Barkley and Romelu Lukaku scoring for the visitors after the Toffees' keeper Joel Robles saved a first-half penalty from Charlie Daniels.

Reading, currently 16th in the second-tier Championship, guaranteed there will be at least one club from outside the Premier League in the last eight as they came from behind to beat West Brom.

They have won only once in the league since the turn of the year but goals from Paul McShane, Michael Hector and Lucas Piazon punished West Brom for a lacklustre display after they had taken the lead through captain Darren Fletcher.

It only got uglier for Albion after the final whistle when their midfielder Chris Brunt was struck by a coin thrown from an area housing West Brom fans.

"I've never seen anything like that in 10 years, it's disgusting," Brunt said in a statement. "I hope the police have got hold of him."

Arsenal's three-year unbeaten run in the FA Cup continued but they laboured to beat a second-string Hull side.

With one eye on Wednesday's Champions League last 16 first leg at home to Barcelona, Arsenal made nine changes from the side that beat Premier League leaders Leicester City last week.

Even when manager Arsene Wenger, in charge of his 100th FA Cup tie for the club, threw on the likes of Alexis Sanchez and Olivier Giroud the Gunners could find no way past Hull's inspired keeper Eldin Jakupovic.

The Gunners now face a testing replay to keep alive their hopes of becoming the first club to win the Cup three times in succession in the modern era.

"The goalkeeper did well of course, but we had maybe 70 per cent possession and more than 20 shots on goal, and we didn't score," Wenger told reporters.

"The replay is not especially good news but Hull defended very well. Between that and going out, we choose the replay."

On Monday, the standout tie of the round sees Chelsea host Manchester City while Tottenham Hotspur play Crystal Palace in another top-flight duel.