The Black Caps captain Brendon McCullum believes simply trying too hard has been the undoing of his side this summer.

Having lost to Australia 2-0 in Australia late last year, the Black Caps are staring down the barrel of another series loss to Australia, trailing 1-0 in the two-match series.

The final Test is underway at Hagley Oval in Christchurch.

It will be McCullum's final match for New Zealand but he said it had been easy to put that behind him ahead of this game. 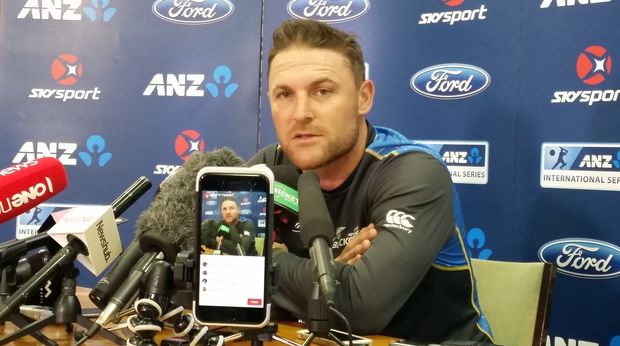 "We were a little bit too keen that last test match and the focus for us this test match is to get back to what has worked for us over the last three years and that's just going out there playing with a lot of enthusiasm, smile on your face and just try and seize the key moments when they arise," he said.

McCullum and the Black Caps appear to have got what they wanted with the Hagley Oval pitch looking very green and lush, a day out from the match.

Australia made the most of winning the toss on a seaming Basin Reserve pitch, which dried out one day two.

Black Caps coach Mike Hesson said he wanted the seam movement to last longer than one day in Christchurch and after looking at the Test strip, he was confident that would happen.

"It's not necessarily going to be a pleasant time out there with bat in hand but maybe its one of those times where fortune favours the brave... but I think it will go (seam) around for a fair while."

New Zealand last won a Test against Australia in New Zealand in 1993 and McCullum would like nothing more than to end that 23-year drought in his final match.

But he said a victory would also be special for Christchurch on the fifth anniversary of the 2011 earthquake.

"(We've had) just a little reminder of what Christchurch can serve up from the earthquake point of view over the past week.

"And I guess that's the beauty of sport... you can give the people of Christchurch the ability to get out and support their team and just enjoy the occasion rather than worrying too much about things rocking and rolling," he said.