Former UFC champion Ronda Rousey says she contemplated suicide after being knocked out by Holly Holm at UFC 193 in Melbourne. 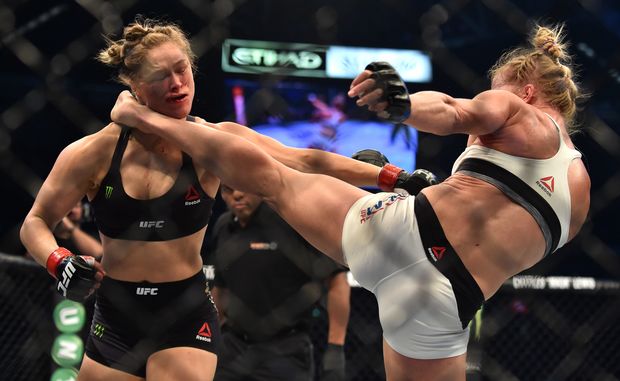 The moment Ronda Rousey (L) was knocked out by Holly Holm (R) at UFC 193 in Melbourne. Photo: AFP

The 29-year-old American revealed the November loss she suffered via head kick led to dark thoughts in the immediate aftermath.

"I was literally sitting there and thinking about killing myself," a candid Rousey told talk show host Ellen DeGeneres on her programme.

"That exact second I'm like 'I'm nothing, what do I do anymore, and no one gives a s....t about me anymore without this'.

"To be honest I looked up and I saw my man Travis (Browne) was standing up there and I looked up at him and I was like, 'I need to have his babies. I need to stay alive'."

"I don't think anyone has ever attempted that before," she said.

"In that first (exchange) I cut open my whole mouth and I knocked my teeth loose.

"I knew she was out there, but like I really don't remember most of it. So I was trying my best to kinda hide the fact that I wasn't even there anymore."

Rousey who received a six-month medical ban after the fight is unlikely to fight regularly in 2016 as she takes time off from the Octagon to focus on filming movies including the Road House remake.

A match with the winner of the fight between Holm and long-time Rousey rival Miesha Tate, potentially at July's UFC 200 has been mooted as the next time Rousey steps in the Octagon.

For help with any issues raised in this story, call: