The All Blacks and Maori All Blacks will take on Ireland and the USA Eagles in Chicago later this year. 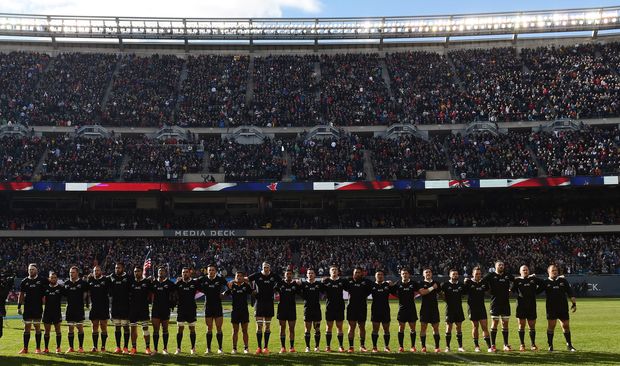 All Blacks lining up for the national anthem at Soldier Field, Chicago. Photo: PHOTOSPORT

The World Champions are returning to Soldier Field to take on the 2015 Six Nations champions on November 5.

It's the first encounter between the sides since the nail biting 2013 Dublin Test when the All Blacks pipped Ireland 24-22.

The Chicago Test is just the fourth visit to the USA by the All Blacks and also marks two years since the historic match between the All Blacks and the USA Eagles when a record USA rugby crowd of 61,500 fans packed out Soldier Field.

The All Blacks will play Ireland again on 19 November at Aviva Stadium, Dublin as part of the End of Year Tour which will also see them play Tests against France and Italy.

Dubbed "The Rugby Weekend", the action kicks off on Friday, 4 November, at the 30,000 seat Toyota Park when the Maori All Blacks return to America for a re-match with the USA Eagles in only the fourth encounter between the two teams. In 2013 they defeated the USA Eagles 29-19 in Philadelphia.

"We have very fond memories of playing in Chicago in 2014," said New Zealand Rugby Chief Executive Steve Tew. "We really appreciated the efforts of the city in rolling out the welcome mat for rugby.

"The Maori All Blacks also play an exciting brand of rugby and are fantastic ambassadors for our culture and our country so this will be a great way to kick off The Rugby Weekend," he said.

USA Rugby CEO Nigel Melville said: "The city and its fans have shown the world how passionate they are about the sport, and we think this weekend will again take the game's popularity to another level."