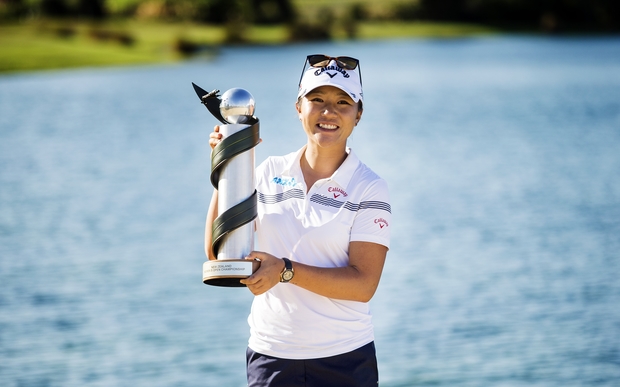 After starting the final day one shot clear of her nearest rival, a 5.9 earthquake hit Christchurch just as she was about to tee off.

But if Ko was slightly shaken up, it didn't show.

Leading by a convincing two-stroke margin, Ko made the walk down a packed-out 18th hole far more enjoyable.

Ko's approach shot was spot on which sent the crowd into booming roars that echoed across the picturesque green.

The 18-year-old world number one fired a final round two under par 70, finishing 10 under par for the tournament.

"To defend a tournament is one thing, but to play well at your National Open in front of this many people, that's what makes it that extra bit more special," said Ko.

After coming up ever so close to an eagle on the par-five 10th, this ensured she went back to back birdies on the 11th and never looked back.

"I had my headphones on [during the earthquake] so I didn't know if I was getting in the rhythm of the song or if it was my caddy, Jason thought that it was his beer from yesterday kicking in," Ko said.

Her composure and class were on show again and she closed out yet another tournament to prove why she is the world's best.

"The ranking puts a lot of pressure on, people who don't know golf may think I should win every week, but I just did my best and seeing the crowd out there made me try even harder," she said.

The leaderboard was jam-packed during the front nine, with American Amelia Lewis coming out of the gates in fine style, to only fade in the dying stages.

Leading amateur Hye Jin Choi of Korea showed she has a great career ahead of her, finishing at eight under par alongside Felicity Johnson and Nanna Koerstz Madsen.

It was simply a one-Ko show after she nailed a hooping right to left putt on the challenging 11th hole to give her a two-shot buffer which she never surrendered.

Ko got emotional afterwards as she thanked New Zealand Golf and the public for all the support they have given her over a short and fruitful career.