New Zealand sailors Peter Burling and Blair Tuke remain well out in front heading into the last day of the 49er World Championships in Clearwater, Florida. 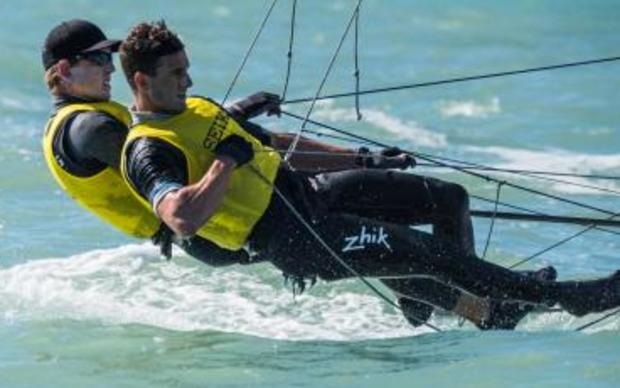 It wasn't all plain sailing for the duo who recorded a 20th in their second race after an average start, but a 4th in the opener and a 2nd to close the day means they maintain their points margin on the pack.

Meech said when they first got out on the water the conditions were good but the waves picked up and things got trickier.

After interruptions early in the regatta organisers added three gold fleet races to the schedule on the final day before the top 10 medal race, and the New Zealand women will be looking to put those to good use.

"One more day of gold fleet racing tomorrow and then a medal race, so there is a lot of points up for grabs and anything can happen," said Meech.

The other kiwi crew of Erica Dawson and Ellie Copeland go into the final day of the regatta holding 18th overall.

In the Nacra 17 World Championship, the NZL Sailing Team pair of Gemma Jones and Jason Saunders improved their overall position after racing on the penultimate day but not enough to make the top ten medal race cut off.

With moments of brilliance through the 15 race series the pair collected three top five race finishes but have been unable to maintain their consistency and finish today in 14th overall.

The Nacra 17 will debut at the Olympic Games this August in Rio.