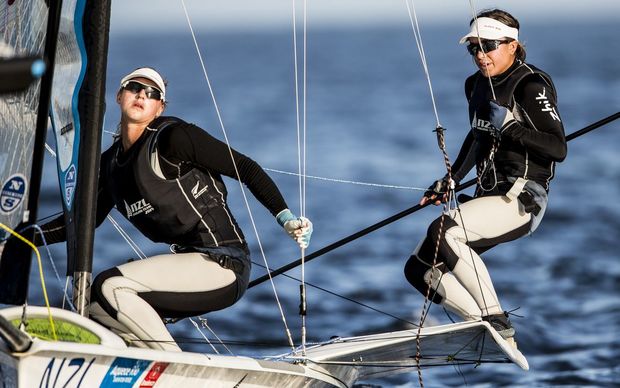 Peter Burling and Blair Tuke have stepped out their overall lead in the 2016 49er World Championships edging closer to securing what would be their fourth consecutive world crown in the hotly contested Olympic men's skiff class.

While their clean-streak of race wins came to an end, the New Zealanders overall performance on day four of the regatta was still among the best of the fleet with a 3-1-2-11 score-card from today's four races. They discard the 11th as their worst result.

Alex Maloney and Molly Meech have continued their strong form into day four of the regatta and have taken the overall lead in the battle for women's 49erFX 2016 world title as a result.

Starting the day with a 3rd place the NZL Sailing Team pair went on to take race seven of the series in convincing style crossing the line well clear of the fleet.

In their next race they placed 10th, but discard that as their worst and will go into gold fleet racing tomorrow having not finished outside the top ten in any of their races so far.

"We got out there this morning and were quite surprised at how nice a wind there was and the first two races went really well for us, and then the last one we had a bit of a bad start and managed to sail through the fleet for a top ten finish so overall I think we're really happy with today," Meech said.

"Our attitude is to just take each day as it comes, and race by race, and just try and stay consistent."

Their leading margin is narrow with Victoria Jurczok and Anika Lorenz of Germany just three points behind them, and Brazil's Martine Grael and Kahena Kunze only one point further adrift.