The Black Caps showed their ruthless side in Wednesday night's demolition of Australia's batting attack. 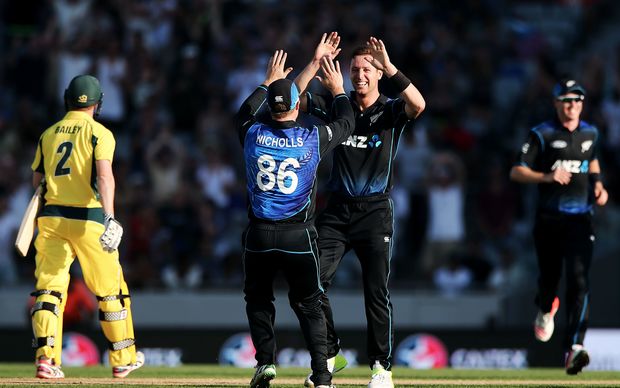 New Zealand beat Australia by 159 runs in the opening one-dayer of the three match Chappell-Hadlee series at Eden Park.

Australia's top order was shattered by openers Matt Henry and Trent Boult who combined to have the visitors 41 for six before the 10th over.

"I think we just knew, especially with Australia, that we couldn't take the foot off, they're a world class side which they've showed many times coming back from tough situations so we just had to make sure that we kept on putting pressure and plying it right the way through, and make sure we're attacking to try and take those wickets," Henry said.

Meanwhile Australia's captain Steve Smith was disappointed in his side after the top order failed to fire.

Before the match, Smith had told his men to be patient at the crease - but they clearly didn't listen.

"Playing over here against those guys we need to take a little longer to get ourselves in, give ourselves a chance, particularly on these small grounds, you can make it up at the back end," Smith said.

"We didn't do that tonight and we're going to have to learn quickly and hopefully we can do it in a few days time in Wellington."

Smith also hinted he may make changes to his starting XI for the next match in Wellington on Saturday.