New Zealand have won the third one-day international against Pakistan by three wickets in Auckland and claimed the series 2-0. 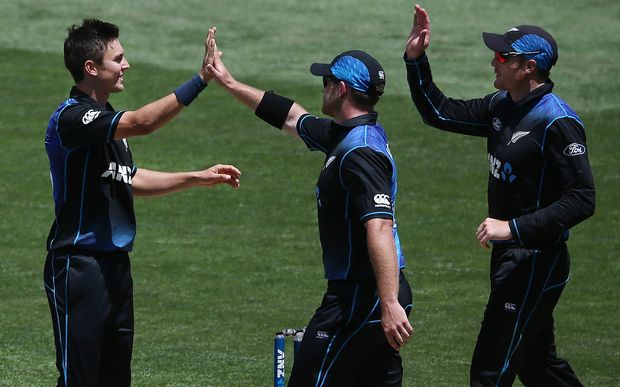 The Black Caps reached the Duckworth Lewis adjusted target of 263 with two balls remaining in their 43 over innings.

Mitchel Santner (10) hit the winning runs with Adam Milne (0) at the other end.

New Zealand had been comfortably cruising towards Pakistan's total of 290 when play was suspended by rain in the 36th over.

Their innings started badly after the Black Caps captain Brendon McCullum was dismissed for a golden duck, caught pulling in the deep.

McCullum was playing his first match since injuring his back in late December, but his departure didn't faze Martin Guptill (82) and Kane Williamson (84) who continued their imperious form of the New Zealand summer.

After Guptill was caught at slip and Williamson stumped while charging, Henry Nicholls (5) and Grant Elliott (10) came and went without greatly troubling the score keeper.

Elliott's dismissal coincided with the start of the 45-minute rain delay, which didn't break Anderson's concentration or distract Luke Ronchi (20) from scoring some much-needed runs in the black strip.

Santner came to the crease after Ronchi was bowled attempting a wild slog.

He was joined by Adam Milne when Corey Anderson (35) was caught trying to find the mid-wicket boundary.

Needing six runs from the final over, Santner hit two fours to win the match and the series.

Earlier, New Zealand prevented Pakistan from posting an imposing total after the visitors won the toss and elected to bat. 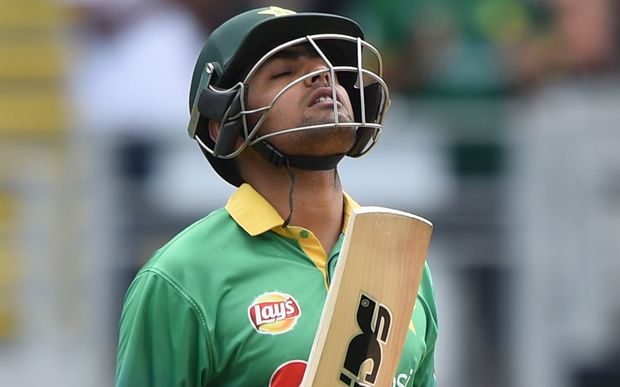 Mohammad Hafeez (76) and top scorer Babar Azam (83) took control of the Black Cap's bowlers and by the time the pair had been dismissed in the 34th over with the score at 215 for 4, Pakistan looked capable of reaching a total well in excess of 300 runs.

But to their credit, the New Zealanders lifted their game with the ball and in the field, limiting the ability of the Pakistan tail to wag.

Wicketkeeper Sarfraz Ahmed (41 not out) was unshakable with the bat as he has been all series, but couldn't build any meaningful partnerships as the tail order collapsed around him.

Milne was the pick of the Black Caps' bowlers taking three wickets for 49 runs.

Matt Henry was the most economical, taking two for 44 off 10 overs, while Trent Boult took two for 60 off nine.