Western Sydney have extended their lead at the top of the A-League table to five points amid a congested top five, outlasting a late comeback from Melbourne City to edge them 4-3 in a contender for game of the season. 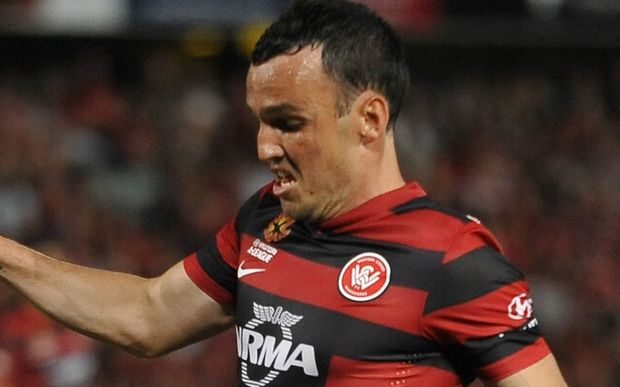 Mark Bridge and Mitch Nichols were the stars at Pirtek Stadium last night, combining for three of the Wanderers' four goals and strangling City who, despite scoring two second-half goals within a minute, could not tame the leaders.

This top-of-the-table clash was a display of impressive football from two fluent, attacking outfits in the title hunt.

The visitors were looking to expand on their league-high 40 goals and climb past the Wanderers to the summit.

As expected, the chances came thick and fast at both ends.

Joshua Sotirio brought pace and was involved in multiple chances, while Dario Vidosic was unfortunate to have a goal disallowed for offside.

A-League top-scorer Bruno Fornaroli could have opened City's account when he floated a ball to Harry Novillo and ran inside for a second receive, only to skew his effort wide.

It was only a matter of time before a goal would eventuate.

In the 32nd minute, Bridge slipped a superb pass into the box for an advancing Nichols.

Nichols shrugged off City defenders and took a touch, before swivelling onto his left foot to slide the ball past goalkeeper Thomas Sorensen and into the far corner.

That moment brought a swift change in the match, with the home side suddenly on the front foot, thwarting City in their own half.

After the break, it didn't take long before Nichols and Bridge were at it again.

Bridge ran downfield and passed to Nichols, who dribbled into the area and flicked back to his teammate to fire past a kneeling Sorensen.

Bridge's second goal - his eighth of the season - came six minutes later, a tap in off Nichols' lovely lob over a sorry Sorensen who had mistakenly run off his line to meet him.

When the game seemingly belonged to Tony Popovic's side, Novillo made a great solo strike, beating Topor-Stanley and driving past Redmayne.

Within a minute, the visitors were quickly back in the game as Fornaroli lunged into the box and sent his 14th goal of the season into the top-right corner.

No sooner did John van `t Schip's side rekindle hope, Anthony Caceres was shown his second yellow card and City went down to 10 men with five minutes of regular time remaining.

Western Sydney capitalised, with Bridge passing through for Castelen to cross inside for fellow substitute Brendon Santalab to drive home.

And in injury-time, Mooy drove a set piece into the box, Paartalu stuck his boot out and gave the small contingent of away fans a consolation.