Leicester returned to the top of the Premier League with a 1-1 draw at bottom club Aston Villa while misfiring champions Chelsea pulled off a great escape in a six-goal thriller with Everton. 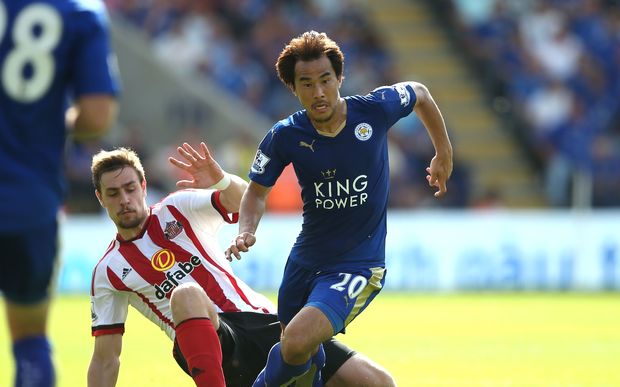 With Manchester City thrashing Crystal Palace 4-0 to go second on goal difference on the same points as Arsenal, Leicester had a golden opportunity to pull three points clear in the late game but had to settle for one after a missed penalty.

Arsenal, the leaders before the weekend on 43 points, can go back in front after their match at Stoke City tomorrow (Monday NZ time).

Japan striker Shinji Okazaki put unsung Leicester, who have defied all the odds this season and are on 44 points, ahead in the 28th minute but Rudy Gestede grabbed a 76th-minute equaliser for rejuvenated Villa.

"It was a tough match, a local derby and it's OK," Leicester manager Claudio Ranieri told Sky Sports. "We had a chance to close the match but it was unlucky...one point is OK."

In an astonishing game at Stamford Bridge, Chelsea drew 3-3 after captain John Terry atoned for an own goal with a 98th-minute equaliser that even home manager Guus Hiddink said was offside.

Everton manager Roberto Martinez described it as a "diabolical" decision by match officials and questioned the amount of time added.

"It's heartbreaking for us, a big, big error," said the Spaniard.

All the goals came in the second half, with Chelsea battling back from 2-0 down before substitute Ramiro Funes Mori put Everton back in front as the game entered stoppage time.

Hiddink, whose unbeaten record in his second stint as interim boss at Chelsea remained intact, did not try to argue about the final goal.

"I like always to give a fair comment on the positive side and negative side," the Dutchman said. "I have watched it and I can agree (it was offside).

"In the last minutes we sent our two central defenders up top and it was all or nothing and at the end it paid off. I think the team with their efforts deserved it."

The Argentine striker scored in the 41st minute after Palace goalkeeper Wayne Hennessey had failed to prevent Fabian Delph's long-range shot squirming into the next in the 22nd.

Aguero doubled his tally in the 68th minute and set up David Silva for a late fourth.

Fourth-placed Tottenham Hotspur are five points off the lead following a crushing 4-1 defeat of struggling Sunderland in the lunchtime match at White Hart Lane.

Danish international Christian Eriksen struck either side of halftime after Sunderland, mired in the relegation zone, had gone in front early through Patrick van Aanholt.

Newcastle's victory lifted them out of the bottom three while troubled Swansea City, who entertain Watford on Tuesday (NZ time), dropped to 18th, a point ahead of Sunderland.

"In the second half we improved a lot. In the end we could have nicked a point when we had a great chance to equalise but, overall, they deserved to beat us," said Hammers manager Slaven Bilic.