Svetlana Kuznetsova rolled back the years with a ruthless 6-0 6-2 demolition of Puerto Rican qualifier Monica Puig to win her 16th WTA title at the Sydney International. 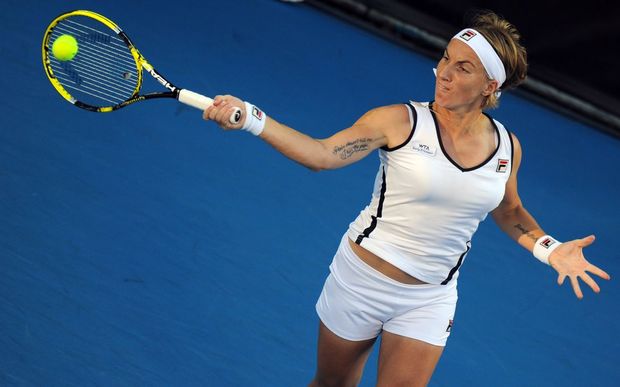 In 55 minutes of one-sided tennis, the 30-year-old former French and US Open champion showed that her rivals should not take her lightly at next week's Australian Open, despite her current lowly ranking.

Kuznetsova's performance was all the more impressive given the Russian had already spent more than two hours on the court earlier on Friday completing her semi-final tussle with world number two Simona Halep, finally winning out 7-6(5) 4-6 6-3.

While that match, held over from Thursday after a thunderstorm wreaked havoc with the schedule at Olympic Park, was a hard-fought battle, the same could not be said of the final clash on Ken Rosewall Arena.

Eight years after her last appearance in the Sydney final, when she lost to Justine Henin, Kuznetsova was a ball of energy from the first serve to the double fault by Puig that handed her the title.

"It feels like I'm 16, it feels great. Everything went my way," Kuznetsova told reporters. "I thought I would be tired but I felt great. It was one of my best finals. I felt really comfortable."

The world number 25 strutted around the court firing winners from both sides and feasting on Puig's second serve to bring a shuddering halt to the Puerto Rican's fairytale run at Olympic Park.

It was not until the fourth game of the second set that the shell-shocked Puig was able to get on the scoreboard, her first service hold earning her a huge ovation from a sympathetic crowd.

Puig had played seven matches, including a quarter-final upset of ex-U.S. Open champion Sam Stosur, to get to the final but admitted she was simply no match for the clinical Russian.

"I played some amazing tennis this week so I'm really proud of what I've done," the world number 94 told reporters.

"She just did everything so well. It was her day. There wasn't much I could do ... The only answer I have is that she was the better player."

Kuznetsova, three-times a quarter-finalist at the Australian Open, will take on Slovakia's Daniela Hantuchova in the first round at Melbourne Park next week.

Meanwhile in the men's draw Grigor Dimitrov continued his promising start to the new season when he showed flashes of his best tennis to beat Gilles Mueller 6-2 7-6(4) and set up a Sydney International final against defending champion Viktor Troicki.

Troicki, who played two full matches yesterday, had to come from a set and 4-2 down to beat Teymuraz Gabashvili 3-6 6-4 6-4 and clinch his place in a second successive final at the Australian Open warm-up, which he won as a qualifier last year.

Dimitrov was better rested having only had to play out the last few games of his 4-6 6-3 6-4 quarter-final victory over Alexandr Dolgopolov, which was stopped by a violent thunderstorm that wreaked havoc with the schedule on Thursday.

The Bulgarian has long been the next big thing of men's tennis and hopes that he might be on the brink of fulfilling his potential were fuelled by an inspired, if ultimately losing, performance against Roger Federer in Brisbane last week.

The 24-year-old again impressed with his flair from the start on Friday as he raced through the first set in 37 minutes.

Muller ramped up his serve to battle back in the second set but Dimitrov kept his composure through the tiebreak to seal victory and his first final since October 2014 with a rasping backhand crosscourt pass.

"It's been a while since I've been in a final and I'm happy, I'm not going to hide that. But my job's not done yet.

"I thought my mental toughness was pretty good today."

Troicki had launched a comeback to beat Nicolas Mahut 4-6 6-3 6-3 in his quarter-final on Friday morning but that was nothing compared to the depths he dug himself out of in his afternoon match.

Russian Gabashvili looked well on his way to a first ATP final when he led 6-3 4-2 but the Serbian returned from a short rain break to win the next four games and level up the contest.

Troicki was broken when he served for the match at 5-2 in the third set and but made no mistake with his second attempt, wrapping up the victory with an ace.

Top seed Bernard Tomic had earlier retired from his quarter-final while trailing Gabashvili 6-3 3-0 and made it clear in remarks to the umpire that his focus was on next week's Australian Open.

Rain prevented any matches being completed on Thursday so Tomic, if he had beaten the Russian, would have had to play a semi-final later on Friday, as well as potentially Saturday's final.