The Court of Arbitration for Sport in Switzerland has upheld WADA's appeal against 34 past and present Aussie Rules players who were involved in Essendon's controversial 2012 supplements program.

The players have been banned for 12 months, which means they will miss the entire 2016 season.

Twelve of the group are currently contracted to Essendon. 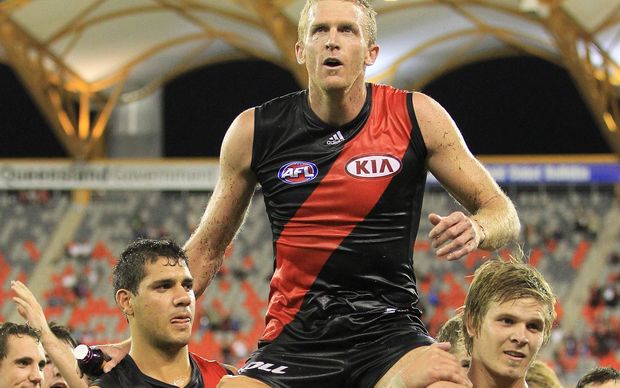 Essendon veteran Dustin Fletcher is carried for the field after playing his 350th game for Essendon during the controversial 2012 season. Photo: Photosport

Last March an AFL tribunal found the 34 were not guilty of using a banned substance relating to the club's 2012 supplements program, led by controversial sports scientist Stephen Dank.

The Australian Sports Anti Doping Authority, who had brought the case, chose not to appeal the decision, but the World Anti Doping Agency WADA exercised its right to appeal, leading to a hearing in Sydney last November.

While it was always felt that the final decision could go either way, the severity of the ban is another unexpected twist in the saga.

There had been speculation that the players' two-year bans could be backdated so heavily that they would only miss a handful of games or even none at all.

Essendon had always been confident any punishment would be minimal.

The CAS verdict is most likely the last step in the official anti-doping process that started on February 5, 2012 when Essendon announced they were coming under a joint AFL and ASADA investigation.

The three-man CAS panel was comfortably satisfied that the players took thymosin beta-4 as part of the club's controversial supplements program.

It is the biggest anti-doping scandal in Australian sporting history and the guilty verdicts and bans will have massive ramifications.

"Thus, most of the suspensions will come to an end in November 2016.

Essendon and the AFL had made contingency plans about top-up players, who also were used during last year's pre-season competition as provisional bans were served.

Essendon captain Jobe Watson is known to be among the banned players and one immediate question is whether he will keep his 2012 Brownlow Medal.