Sri Lanka captain Angelo Mathews is ruing the cost of a poor bowling display in the first innings of the cricket Test in Dunedin. 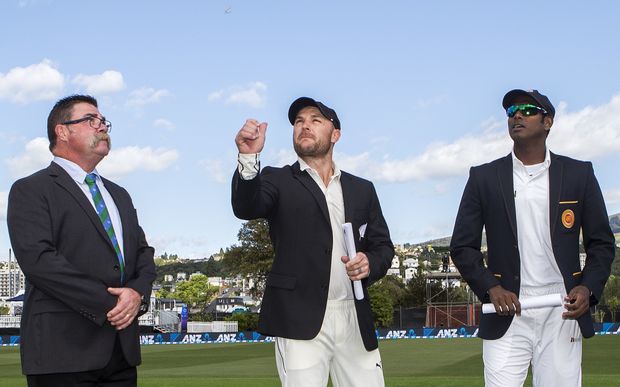 Brendon McCullum (middle) and Angelo Matthews at the toss for the first test in Dunedin. Photo: Photosport

The Black Caps rattled along at more than four runs an over on the first day and finished it at 408-9, which helped set up their 122-run victory when they eventually bowled Sri Lanka out in their second innings for 282.

"There was a lot of grass on that wicket and after we won the toss I expected a little bit more from the bowlers.

"But we didn't land the ball on the right spot and they capitalised on that.

"With the batting lineup they have if you bowl too loose they will capitalise (and) unfortunately they got off to a flier.

"In the second innings we bowled pretty good lines and lengths but it was too late."

The hosts also found the pitch difficult to extract any significant sideways movement or swing through the air and resorted to periods of hostile short-pitched bowling to make it as uncomfortable as possible.

Left-arm spinner Rangana Herath was targeted several times by New Zealand's bowlers with the 37-year-old being struck twice, once on his hand and the other in the head, but it was the way he shook it off and continued to occupy the crease that showcased the resolve the side had.

"We showed a lot of guts," Mathews added. "Especially the bowlers in the way they batted in both innings but unfortunately we couldn't hang in there."

The Sri Lankans have made no secret they are a team in transition following the retirements of Mahela Jayawardene and Kumar Sangakkara and Mathews felt confident his team would improve for the second test in Hamilton starting on Friday.

"Yes it is an inexperienced team, not too many guys have played more than 10 tests, but it's just a learning curve for us and a mindset thing," he said.

"We have to go out there and enjoy it."