There were no positive drugs tests from the Rugby World Cup. 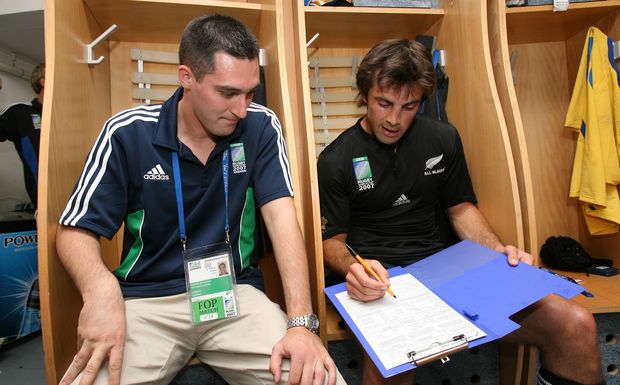 Conrad Smith about to take a drugs test Photo: PHOTOSPORT

Run in partnership with UK Anti-Doping, the programme has recorded no adverse analytical findings to date.

The testing programme included a mix of urine (317 samples collected) and blood (151).

England 2015 was the first Rugby World Cup to feature the Athlete Biological Passport programme following its introduction by World Rugby in 2013.

World Rugby Chairman Bernard Lapasset said: "Doping is a major threat to the integrity of sport and World Rugby is committed to a prevention programme of targeted testing and global education to ensure that players at all levels understand the performance and health importance of maintaining a level playing field for all.

"With doping in sport very much in the spotlight, it is more important than ever for a sport as global as rugby to ensure it has a programme that combines intelligence-led testing with a strong education initiative such as Keep Rugby Clean. World Rugby has taken a positive step in increasing its resources for testing and education, and retaining samples for future analysis as is encouraged under the revised World Anti-Doping Code."