Matt Jones held off world number one Jordan Spieth and a charging Adam Scott on his home course to win the Australian Open by one stroke. 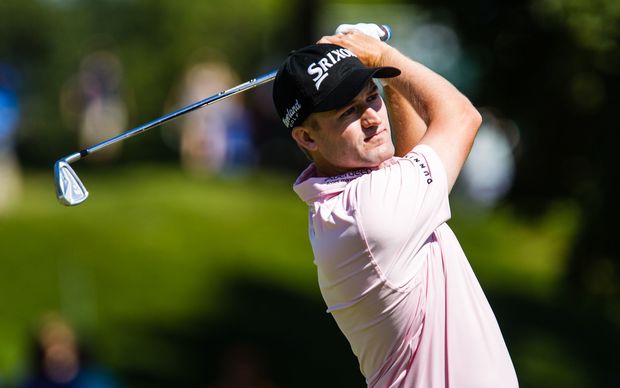 Leading by three shots overnight, Jones gave his pursuers every chance with a double and triple bogey on the front nine, but four birdies in a two-over-par 73 proved enough for victory on eight-under-par at the Australian Golf Club.

Defending champion Spieth had a 15-foot eagle putt at the last to force a playoff but sent his ball wide of the hole and had to settle for a 71 and a share of second place with Scott.

"That was very stressful, it wasn't comfortable out there for me," an emotional Jones said after receiving the Stonehaven Cup for the first time.

"I've watched the Australian Open for many years and just to have my name on that trophy is something I'll never forget."

Scott, still seeking his first title of the year, had surged up the leaderboard with a seven-birdie 65 to move to seven-under on another blustery day in Sydney.

His compatriot Rod Pampling had earlier sunk a 60-foot eagle putt on the 18th green for a course record 10-under 61, which was good enough for fourth on six-under.

Pampling's stunning score bettered the 63 Spieth carded to win the title last year, a final round that had given the American high hopes he could overhaul Jones's overnight lead.

The 35-year-old Australian dropped three shots by going bogey-double bogey on the first two holes but Spieth also bogeyed them and the final group dropped back towards the chasing pack.

Jones recovered with birdies at the fourth and sixth but a calamitous triple bogey at the ninth after hitting the trees and plunging into the water saw him drop to six-under, level with clubhouse leader Pampling.

Spieth drained an eight-foot downhill putt on the 11th to also move to six-under and Scott, ahead on the 14th, joined him to make it a four-way tie for the lead.

The American's parity was short-lived and another visit to the greenside sand saw him bogey the 12th just before Jones brilliantly chipped in from a bunker to save par.

Jones inched ahead on seven-under with his third birdie at the par-five 14th, which Spieth matched to rejoin Pampling and Scott in second place.

Another fine approach shot to the 18th, which he eagled on Saturday to keep his title hopes alive, saw Scott birdie the last to move back to the top of the leaderboard with Jones.

Jones birdied the 16th to move a shot ahead again, however, and he held his nerve despite finding the trees twice on the 17th to clinch the Stonehaven Cup with a short par putt on the final green.