The world number one Jordan Spieth is hoping to defend his Australian Open title in a final round shootout with Sydneysider Matt Jones. 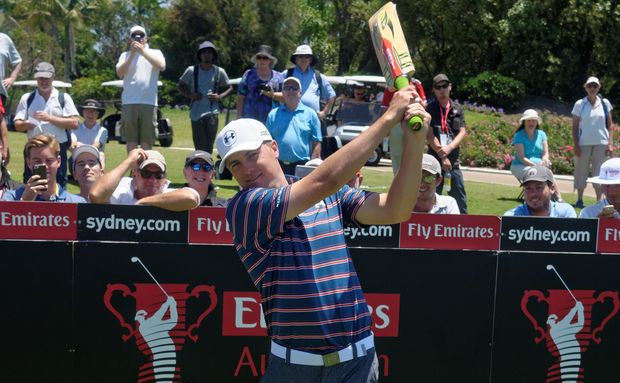 The 22-year-old American's eagle-birdie finish to the third round ensured he would go head-to-head with Jones in the final group to tee off at the Australian Golf Club on Sunday.

At seven under for the tournament, the U.S. Open and Masters champion will start the day three shots behind the Australian, but thinks he might be able to find another gear for the final 18 holes.

"We've been working on some things," he told reporters.

"They've just gotten a little bit easier day-to-day and my putting's been just slightly better today, and so I do believe that I have yet to peak at this tournament.

"I don't know if it will be good enough, but I think that I'll peak tomorrow."

Spieth thought Saturday's round was one of the "best fought" of his professional career after he started the day with three bogeys in the first four holes.

The Texan, whose success has been so recent that he has only previously defended one title, hit a course record 63 to win the tournament last year but said he would be putting memories of that brilliant round to the back of his mind on Sunday.

For Jones, Sunday's final round at a club where he has been a member for 20 years offers a chance to have his name etched on the Stonehaven Cup along with some of the greatest golfers of all time.

"It would be fantastic," the 35-year-old said. "I watched (Greg) Norman win it and (Adam) Scott win in it. I've been close before and tomorrow I'm going to do all I can to put my name on the trophy alongside (Jack) Nicklaus and Norman and those guys."

Adam Scott recorded his best round of the Australian Open today firing 3-under 68 to move into the top-10.

Joining him on 1-under the card after three rounds are Brett Rumford, Todd Sinnott and Ryder Cup Captain Darren Clarke.

At two over par in a tie for 14th, Gareth Paddison is the best placed New Zealander following an even par third round 71.