Left arm pace bowler Trent Boult is in doubt for the inaugural day-night Test, with the swing specialist needing to bowl flat out on Wednesday to retain his place in the New Zealand line-up.

Boult is suffering from a disc irritation, the same back injury that forced Tim Southee off the field during the first Test.

Southee was able to prove his fitness and take part in the second Test.

Southee is upbeat but unsure whether team physio Tommy Simsek will be able to achieve the same with new-ball partner Boult.

It's more of a day by day process with Trent," Southee said.

Boult failed to bowl in NZ's two-day tour match against Western Australia, which was played under lights and with a pink ball. 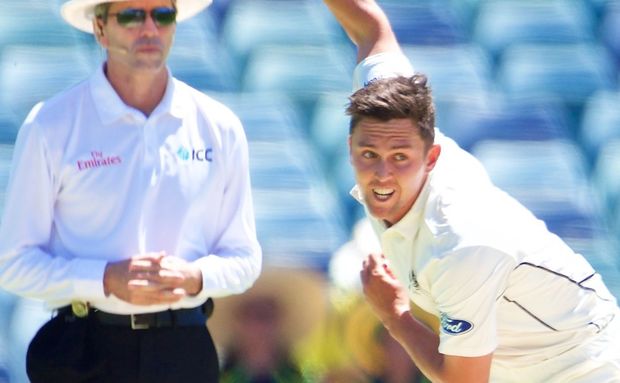 Trent Boult will have to prove his fitness ahead of the inaugural day-night test. Photo: Photosport

The 26-year-old bowled off a few steps at the WACA prior to play starting on Sunday.

But the left-armer will need to do a lot more to convince New Zealand coach Mike Hesson he is right to go for the historic clash that starts on Friday at Adelaide Oval.

"The plan was that he bowled this morning, so he got through that OK," Hesson said.

"I guess we'll just have to see how he travels to Adelaide.

"He's going to have to bowl flat out, two days out from the Test. If he's able to get through that then he'll be considered for the Test."

Boult suffered a stress-related injury to his back earlier this year and was underdone when the squad arrived in Australia.

"It's very similar to the thing Tim had. It's nothing major at this stage," he said.

"We'll be cautious, but we also know if it swings and if Trent's going to be on top of his game he'll be good ... for us."

Boult was down on pace and struggled for control for much of the Tests at the Gabba and WACA.

At his best, Boult's in swinging deliveries are arguably just as dangerous as anything Mitchell Starc is capable of.

Starc and Boult shared the mantle of leading wicket-taker in this year's World Cup with 22 victims each.

Neil Wagner will almost certainly take Boult's place in the side if Hesson is forced to make a change.

"Generally it only swings for 10 (overs) but I thought he swung it for another 10 or 15 after that, which was good.

"And one trait with Neil is you know he keeps running in all day, so really good to see that," said Hesson.