Jonah Lomu will be remembered as one of rugby's greatest ever stars after changing the game forever, says former All Black captain Sean Fitzpatrick. 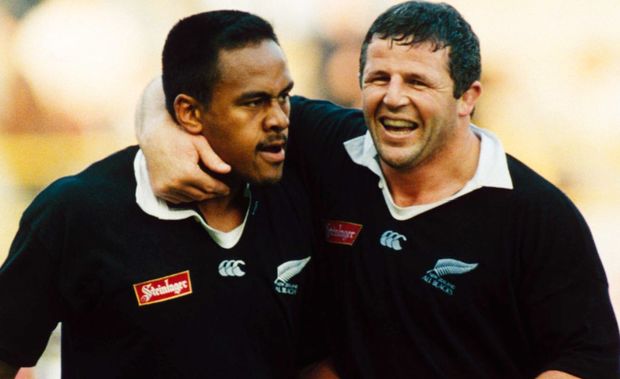 Jonah Lomu and Sean Fitzpatrick playing for the All Blacks. 1995. Photo: PHOTOSPORT

The retired All Black winger's death at the age of just 40 has left fans across the globe shocked.

Lomu, who scored 37 tries in 63 Test matches, had suffered from health problems since his retirement from the game in 2002 due to a rare kidney disease.

He died yesterday after collapsing just hours after returning from a trip to Dubai.

Lomu is best remembered for his impact on the 1995 Rugby World Cup, when he scored seven tries, including four in a devastating semi-final display against England.

His try against England at the 1995 Rugby World Cup still stands as one of the greatest tries of all time:

"Everyone wanted to be Jonah Lomu. The way the game changed was because of the way he played. He will go down as one of the greatest."

Lomu was in "good form" when he saw him just a few weeks ago during the Rugby World Cup, and his death was "totally unexpected".

"He was bouncing around up here and it's just a total shock," Fitzpatrick told Morning Report.

Fitzpatrick remembered watching Lomu play in high school and being amazed at his skills.

"The Australian school boys were playing the New Zealand school boys and this one J Lomu scored I think three or four tries while we were watching the game, and blow me down within 12 months he was playing on the wing of the All Blacks."

After Lomu started playing with the All Blacks a plan formed to be expansive, fast and high-tempo, with wingers Jeff Wilson, Eric Rush and Glen Osborne expected to form the tries, Fitzpatrick said.

"Little did we know that we were going to end up with a 19-and-a-half stone, six-foot-five winger who was going to wreak havoc. He broke the mould really of what rugby players were meant to do, and in the space of six or seven games he became a global superstar."

"I think he was the first and is the only global superstar. You can go anywhere in the world, you can hop in a taxi in New York and talk about the All Blacks and the only name they will mention is Jonah Lomu, which says so much.

"Most of the people in the world know him as a phenomenal rugby player, but he was so much more than that. He was a wonderful man, very generous, very loving, very, very humble and always part of the team - he never thought he was bigger than the team."

Then-England fullback Mike Catt was the man Lomu famously trampled over during his semi-final blitz but he paid his own heartfelt tribute.

"He's inspired millions of people around the world to watch the sport and start playing. He changed rugby union during the 1995 World Cup.

"His ability to move 18 stone was amazing. He didn't want to run through people every time, but he did have that ability and his footwork and speed off the mark was second to none, you just couldn't get near the guy. But if he needed to run through four of you he could."

He retired from the game in 2007, the year he was inducted into the International Rugby Hall of Fame.

"He could have played in any position he wanted to on the field. It was (former All Blacks coach) Laurie Mains who decided to play him on the wing," former teammate Zinzan Brooke said.

"It's amazing what he did in that '95 World Cup. He launched himself on the international scene and changed the way the game was played in an instant."

Former All Blacks doctor John Mayhew, who also acted as a personal doctor to Lomu, insisted his former patient was in "pretty good shape" prior to his death.

"Jonah has been in pretty good shape, he arrived back from Dubai yesterday and unfortunately suddenly collapsed and died at home this morning," he said.

"He has been a fantastic person and a great friend, I have been his doctor for a long time. It's staggering, a very sad day."