Nico Rosberg has swept to his fifth successive pole position with his Mercedes team mate Lewis Hamilton qualifying alongside him on the Brazilian Grand Prix front row. 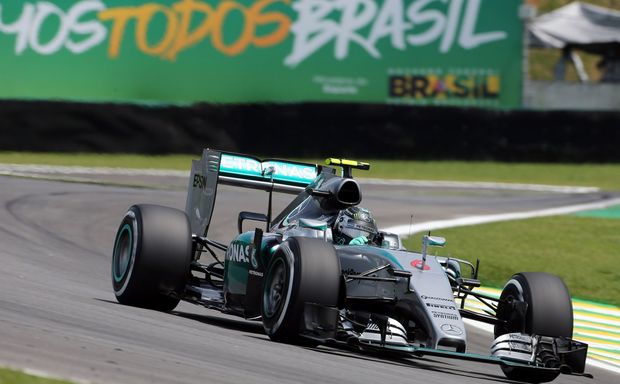 The German again denied Hamilton, who won his third championship in Texas last month with three races to spare, a 50th career pole, this time by a mere 0.078 of a second on a sunny afternoon at Interlagos.

"I'm just thinking about the individual races. I'm here, I want to win," said Rosberg who won from pole in Brazil last season.

"It's always better to finish on a high than a low, for this season and also thinking about next year," he added, describing his last lap as "very close to the edge".

Ferrari's Sebastian Vettel qualified third and will be joined on the second row by team mate Kimi Raikkonen because Williams driver Valtteri Bottas, who was fourth fastest, has a three-place grid penalty.

Hamilton has so far tried and failed eight times to win in Brazil, but four of the last six winners in Brazil have started in second place.

"My main job this year is done," said the 30-year-old Briton when asked how much victory in Brazil mattered to him.

"It was good today actually. I got a really good balance with the car," added Hamilton who had been fastest in Saturday's final practice despite having problems with the gearbox and spinning.

"It is a circuit I haven't won at. Last year I was stronger in the race and I hope to carry that through and hopefully make the difference."

Despite his recent dominance in qualifying, Rosberg has only managed to convert one of his previous four poles into victory, the most recent in Mexico.

Force India's Nico Hulkenberg and Red Bull's Daniil Kvyat will share the third row, with the Williams pair of Bottas and Brazilian Felipe Massa behind them.

Daniel Ricciardo was ninth fastest for Red Bull but has a 10-place penalty for an engine change to the latest upgraded Renault power unit.

"From what I saw during the session it wasn't worth it," said the Australian of the switch.

"Let's say we had to try it, we had nothing to lose. But at the moment it honestly hasn't given us anything we're after."

Alonso was told to pull over and park in the first phase of qualifying due to ongoing problems with the Honda power unit. 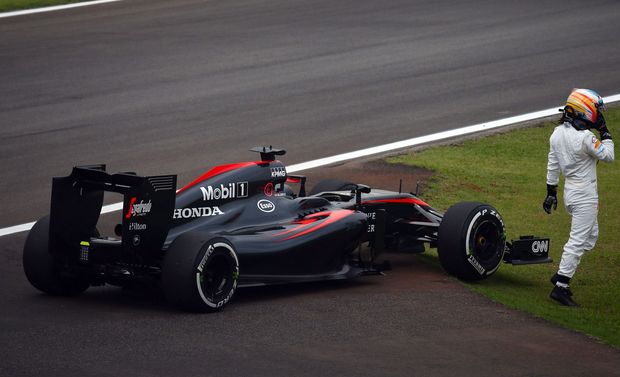 The Spaniard did so and then sat trackside on a foldable picnic chair, sunning himself and winking at the cameras.

"In Abu Dhabi (in two weeks) I will have to be better prepared and bring the suntan lotion," he said, having had a similar failure in Friday practice.

After Button also failed to make the cut, the pair sneaked onto the podium for a quick photograph.