All major sporting events in the Paris region have been suspended as France mourned the victims of the deadly attacks in the capital city the night before.

Shows of respect, sadness and support took place well beyond French borders as sport's global family, from Sydney to Washington to Sao Paulo, united in sympathy for the 129 people dead and 352 wounded. 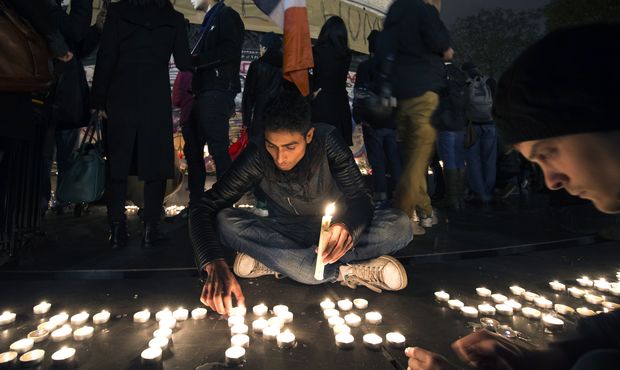 A man lights candles at a makeshift memorial at the place de la Republique in Paris Photo: AFP

Before the Euro 2016 football playoff between Sweden and Denmark at the Friends Arena in Stockholm, the stadium was lit up in red, white and blue.

A minute's silence was also held before the playoff between Ukraine and Slovenia in Lviv, with European football's governing body announcing that UEFA games could feature similar tributes over the next few days.

The shows of solidarity with France went beyond Europe.

Sydney FC football fans held up a vast French tricolore ahead of their A-League match against Melbourne Victory while the ice was illuminated in red, white and blue before a Washington Capitals NHL game with Calgary Flames.

Jockeys at a major horse race meeting in Cheltenham, England, all wore red, white and blue armbands and in the BMW Masters golf tournament in Shanghai, French golfer Benjamin Hebert had the message "Pray for Paris" emblazoned on his cap.

No matches were scheduled this weekend in France's elite Ligue 1 but domestic TV stations Canal Plus and TF1 said they were calling off their main football programmes on Sunday.

A friendly international against England scheduled for Wembley on Wednesday will go ahead as planned, the French Football Federation said.

"As we speak the game is on, yes," a spokesman for the federation told Reuters by telephone.

France were playing Germany at the Stade de France when the Saint-Denis attack took place outside the stadium. 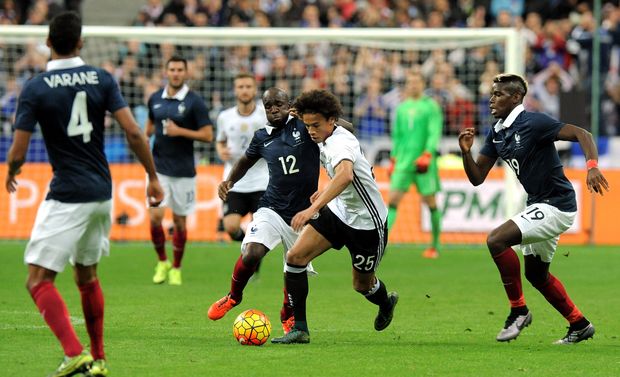 Leroy Sane of Germany and Lassana Diarra of France tussle during the friendly at the Stade de France Photo: AFP

Former Real Madrid, Arsenal and Chelsea midfielder Lassana Diarra, who played for France in the friendly, said his cousin died in one of the shootings that took place in Paris.

On his official Twitter account, Diarra wrote: "In this climate of terror, it is important for all of us, who are representatives of our country and of diversity, to speak up and to remain unified in the face of a horror which has no colour, nor religion.

"Together, we must defend love, respect and peace."

European Professional Cup Rugby said that all Champions Cup and Challenge Cup games in France this weekend would be cancelled.

All basketball and volleyball matches in the country were also called off.

The risk level for the Euro 2016 football finals in France has increased but the competition should not be cancelled, the head of the organising committee said.

"The risk had gone one level up in January, it has just gone higher," Jacques Lambert told French radio RTL. "Wondering whether Euro 2016 must be cancelled is playing the game of the terrorists."

The committee handling France's bid to host the 2024 Olympics said: "As Parisians we stand in solidarity with the people of Paris and of France in uniting against these acts of terror".

The International Olympic Committee (IOC), based in Lausanne, said the Olympic flag would fly at half-mast.

"We stand united with all people from all around the globe. Our thoughts are of course with the families and friends of those who have been killed or wounded," the IOC said.

There will also be a minute's silence before the start of the Brazilian Grand Prix. French Lotus driver Romain Grosjean tweeted: "From Brazil we think of you."

French tennis doubles pair Nicolas Mahut and Pierre-Hugues Herbert plan to pay tribute to the victims during the ATP World Tour Finals in London that start on Monday.

"We are discussing with the ATP to do something, at least to wear something on the shirt," said Mahut, who lives in Paris.