Russia's participation in next year's Rio Olympics is under threat following their suspension by Athletics' world governing body which comes in the wake of revelations of widespread, state-sponsored doping. 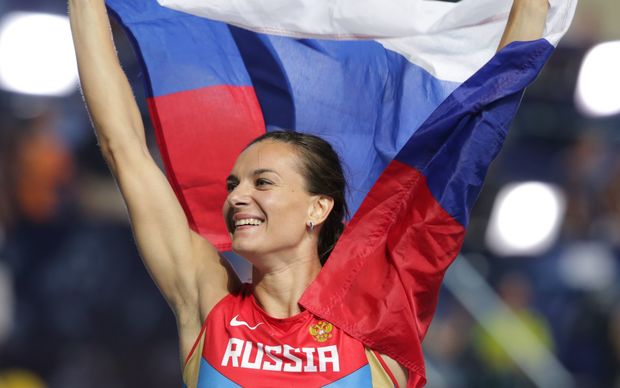 Pole vaulter Yelena Isinbayeva of Russia celebrates after winning. Note: she is not implicated in the latest doping claims. Photo: PHOTOSPORT

The International Association of Athletics Federations' (IAAF) voted this morning to provisionally suspend the Russian federation and the country's athletes from the sport, jeopardising the team's ability to take part in next year's Rio Games

The IAAF council voted 22-1 in favour of the sanction, with the Russian representative not able to vote.

The decision came after the IAAF held a three-hour teleconference, hosted by president Sebastian Coe, to discuss Tuesday's report by the independent commission of the World Anti-Doping Agency (WADA), which recommended the punishment.

The report alleged "systemic" collusion between Russian athletes and the country's federation and anti-doping authorities and a "deeply-rooted culture of cheating" that enabled athletes to take performance-enhancing drugs without fear of being tested.

Positive tests were covered up or destroyed.

The report recommended suspending the Russian federation until a "new framework" was in place.

"Today we have been dealing with the failure of ARAF (All Russia Athletics Federation) and made the decision to provisionally suspend them, the toughest sanction we can apply at this time," Coe said in a statement.

"But we discussed and agreed that the whole system has failed the athletes, not just in Russia, but around the world.

"This has been a shameful wake-up call and we are clear that cheating at any level will not be tolerated. To this end, the IAAF, WADA, the member federations and athletes need to look closely at ourselves, our cultures and our processes to identify where failures exist and be tough in our determination to fix them and rebuild trust in our sport. There can be no more important focus for our sport."

The first event likely to be affected by the ban is the European cross-country championships in France on December 13th.

Russia will be stripped of hosting the world race walking and world junior championships next year.

The main athletics events in 2016 are the world Indoor Championships, the European athletics championships and the Olympics in Rio de Janeiro.

To regain membership to the IAAF the new federation would have to fulfill a list of criteria. An inspection team will be led by Independent Chair Rune Andersen, an independent international anti-doping expert (Norwegian) and three members of the IAAF Council who will be appointed in the next few days.

In the leadup to the decision, Russian star pole vaulter, Yelena Isinbayeva, had pleaded with athletics authorities not to enforce collective punishment against the country's athletes.

"I worked hard and honestly throughout my career. I've practised and won the world championships, the Olympics Games, set new world records," said a statement from Isinbayeva on the Russian Athletics Federation official site.

"All of my victories are honest, clean and well-deserved. I've always strictly followed and still follow all the rules of the anti-doping code."

Isinbayeva, who has set 28 world records in women's pole vault during her career, asked IAAF chiefs to deal with the country's athletes individually rather than collectively.

"The situation around the Russian athletics team is very sad. But I'd like to issue a pressing request: don't reduce all our athletes to the same level," she said.

The IAAF has previously suspended members, including South Africa during its Apartheid regime, Afghanistan, Vanuatu, Algeria and Gabon, but none of those were drugs-related.

Coe's predecessor as president, Lamine Diack, is being investigated by French police over allegations he received bribes to cover up positive doping tests of Russian athletes but Friday's meeting did not discuss that issue.

Other aspects of the IAAF's actions regarding Russia were withheld from the commission's report on Monday as they form part of an investigation by Interpol into international corruption involving officials and athletes.