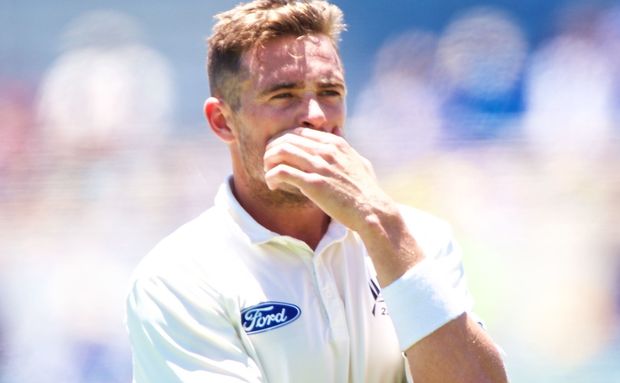 The Black Caps bowler Tim Southee during day one of the second Test against Australia. Photo: PHOTOSPORT

Southee was on the receiving end of a stream of abuse during one of New Zealand's worst ever days of Test cricket.

A small number of unruly fans were reportedly dealt with by WACA officials after Southee complained of low-brow sledging.

The Black Caps bowling coach Dimitri Mascarenhas did his best to play down the incident after stumps on day one.

"Obviously we're expecting a bit of abuse from the crowd," Mascarenhas said.

Warner scored an unbeaten 244 as Australia finished the day at 416 for 2.

It was New Zealand's worst start to a Test match since conceding 5-418 against England in Christchurch in 1933.

Mascarenhas conceded his bowling unit bowled poorly around 85 per cent of the time.

And he knows they'll need to shape up today on day two or risk more pain at the hands of Warner.

"We've tried a few plans and they're definitely not working at the moment," Mascarenhas said.

"We're just going to have to reassess and see where we need to bowl to him.

"It is tough. He'll go through spells where he'll hit 20 ones in a row, and then all of a sudden he'll hit 20 off an over. He is pretty phenomenal at the moment."