New Zealand cricket captain Brendon McCullum is demanding his bowlers lift their game in the second test against Australia starting in Perth this afternoon. 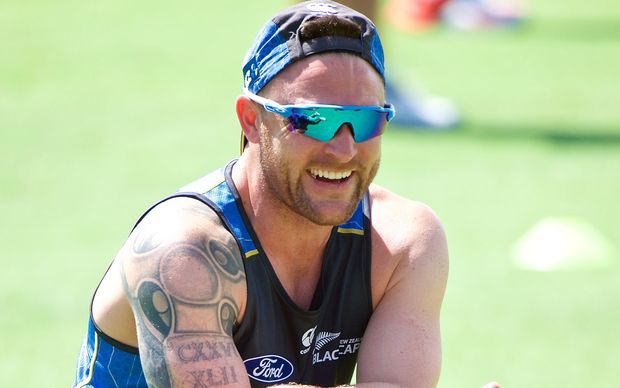 The Black Caps captain Brendon McCullum laughs during training before the 2nd test against Australia in Perth. Photo: PHOTOSPORT

Australia won the first test by 208 runs and McCullum believes they let themselves down in the bowling department, an area where they have shone in recent times.

"One of our major strengths has been that we've been able to execute plans over a period of time and then quickly adapt plans and be able to get totally behind them and make sure we're accurate around those plans as well.

"I thought we were just a little bit off in that first test match and that can be a number of reasons but I've got heaps of confidence in these guys that we're going to be able to bounce back."

While the Black Caps are aiming for an improved bowling performance Australia are targeting New Zealand batsman Kane Williamson.

The Black Caps first drop scored 140 and 59 in the first Test loss in Brisbane and Australian captain Steve Smith said Williamson is one the world's best batsmen and confirmed he's someone the hosts have been doing their homework on.

"Just his eagerness to bat time really holds him in good stead. I think he plays the ball really late under his eyes and he hasn't been caught in the slips in about 12 months and that's quite incredible for a number three batter.

Despite the Australian's eagerness to roll the New Zealand batsman, as they did in their crushing victory in the opening test in Brisbane, McCullum said there was no fear among the Black Caps batting line-up of the Australian pace duo of Mitchell Starc and Mitchell Johnson.

The two sides begin the second test of their three match series in Perth this afternoon on a WACA pitch renowned for its pace and bounce.

The Black Caps struggled to cope with the pace of Starc and Johnson at the 'Gabba but McCullum is confident of an improved effort this time.

"If you can get through your first 15-20 balls and get used to the ball potentially hitting the stickers on your bat, then you start to develop your ability to play your cross batted shots, jeez you can start to score pretty quickly out there [the WACA pitch].

"They're good bowlers we know that and they bowled pretty well against us in that first test match, so we've just got to be a little bit better than what we were in Brisbane and there's no fear there, though they are very good bowlers."

McCullum says pace bowler Tim Southee will make the decision about his own fitness for the second test, which starts this afternoon at 3:30pm.

Southee suffered an irritated disc in the first test and couldn't bowl in Australia's second innings in Brisbane.

The Black Caps will be forced to make at least one change from their first test lineup after all rounder Jimmy Neesham was ruled out of the rest of the series, also with a back injury, and the left arm pace bowler Neil Wagner has joined the squad.

Matt Henry is likely to join the pace attack if Southee is ruled out.