New Zealand cricket coach Mike Hesson is cautiously optimistic strike bowler Tim Southee will be fit to play in the second test against Australia, starting on Friday in Perth.

Southee suffered a back strain on the opening day of the first test in Brisbane, significantly weakening the Black Caps bowling attack for the rest of the match.

Hesson said Southee's return would add another dimension to the pace-bowling attack in Perth. 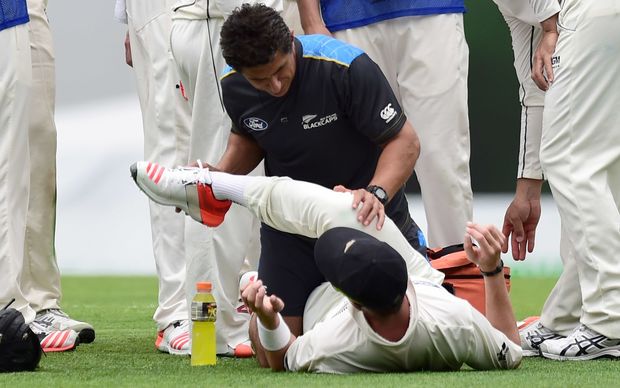 Tim Southee gets treatment from the Black Caps physio during the first test at the Gabba in Brisbane. Photo: Photosport

"We need a bit more accuracy and a little more aggressive intent with the ball and they (Southee and Boult) have done that many, many times for us before," said Hesson.

"We were a little bit underdone (going into the match) but we will be better for it."

Should Southee not make the Perth lineup, Australia coach Darren Lehmann said it would be a big loss for the Black Caps.

"He's a quality bowler. It's no good when you lose anyone to injury from either side. We know they are a good side and we've got to play well again in Perth," said Lehmann.

Australia lead the best of three test series one-nil after their 208-run win in Brisbane.