England international Sam Burgess has quit rugby union after just one year to return to rugby league and the South Sydney Rabbitohs. 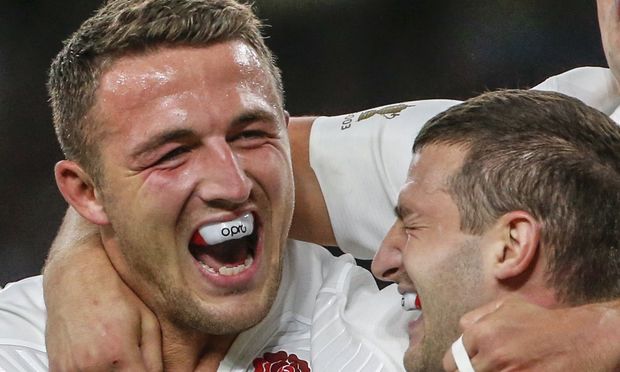 England's Sam Burgess and Johnny May during the Rugby World Cup. Photo: PHOTOSPORT

Burgess will leave English Premiership club Bath with immediate effect in order to return to the NRL.

The 26-year-old had two years left on a three-year deal with Bath.

The Rabbitohs said Burgess has signed with the club until at least the end of the 2018 NRL season.

Burgess was a member of the England squad that recently became the first Rugby World Cup host nation to exit the tournament in the group stages, with coach Stuart Lancaster criticised for what many believed was overly rapid promotion of the former NRL champion into the Test side.

It was only last year, after helping South Sydney win the NRL Grand Final, that Burgess changed codes with the express ambition of playing for England at the World Cup.

The end of his brief spell in union is likely to prove embarrassing for both Bath and Lancaster, whose position as England coach is currently being scrutinised as part of a Rugby Football Union (England Rugby) review into England's woeful World Cup campaign.

Burgess will re-unite with brothers George and Thomas at the Rabbitohs.

"I could not be happier to see Sam coming home to the Rabbitohs," Maguire said.

"He had an enormously positive impact on our Club, both on and off the field, throughout the five seasons he was here, and to be bringing back one of the game's most dominant players is fantastic for not only our club, but the game itself."

"He wanted to test himself in rugby union and he achieved many of his goals, becoming a dual international for England and representing his country at a Rugby World Cup."

"The next chapter is for him to return to the game he was born to play, and we're over the moon that he is coming home to do that with his Rabbitohs family here at South Sydney."

Burgess said he was grateful to England Rugby and Bath for his experience in union and was now looking forward to getting stuck into training alongside his Rabbitohs teammates.

"I want to thank everyone at England Rugby and Bath for some great memories over the last 12 months," Burgess said.

"I must also thank Bath especially for granting my release to return home to my family who I have missed more than I could have imagined."

"I am also extremely excited to be joining back up with South Sydney. I cannot wait to get back into the Rabbitohs culture."

"I had a wonderful time in England and learnt a lot about the game of rugby union as both a back and a forward, and I have definitely developed as an all-round player and athlete after that."

"I'm now very lucky to be given the chance to come back to Souths."

"I look forward to getting stuck into training with all the boys and working hard for the upcoming season."

All Black Sonny Bill Williams has lamented Sam Burgess' decision to return to the NRL, saying on social media his departure is a sad loss for rugby union.

However the two-time Premiership winner and two-time Rugby World Cup champion believed the move was a huge boost to South Sydney's title hopes.