The state of parts of the Flemington home straight could be a factor in the outcome of this afternoon's $6.5 million Melbourne Cup. 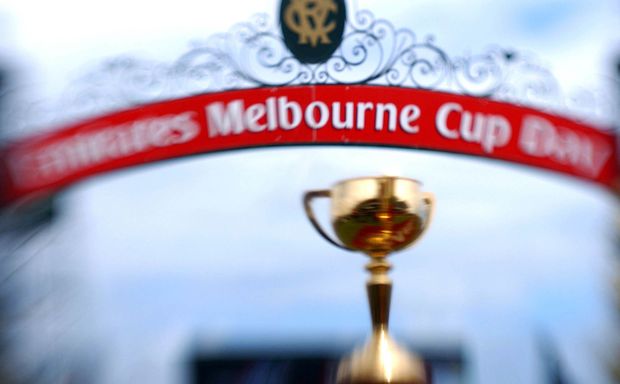 During last Saturday's Derby Day, the Flemington surface heavily favoured horses on or near the running rail, while those racing wider on the track struggled to make ground.

In an effort to try and compensate for the acute bias last weekend, the running rail has been moved out 2m.

It's hoped that fine weather since and a temperature high of 22° degrees will at least reduce the bias.

The clear favourite in a field dominated by northern hemisphere gallopers is the Japanese-trained Fame Game, who was an unlucky 6th in the Caulfield Cup.

The race starts at 5pm.

A number of punters are pinning their faith on English trainer Ed Dunlop shedding his bridesmaid tag with Trip To Paris.

Dunlop is yet to win a race in eight Australian starts, but has produced six placings with Red Cadeaux finishing second on four occasions - three times in the Cup and once in the Queen Elizabeth Stakes in Sydney.

The O'Leary brothers - Dan, Michael, Shaun and Humphrey - own the 2014 Group 1 Auckland Cup winner, who is trained by expatriate New Zealander Chris Waller. It is expected up to 70 family and friends of the O'Leary's will travel to Melbourne to support Who Shot Thebarman. The seven-year-old was bred by White Robe Lodge's Brian and Lorraine Anderton in North Taieri, Mosgiel. This will be Who Shot Thebarman's second tilt at the Melbourne Cup after finishing third in the 2014 edition of the great race.

Sired by the great Zabeel, who passed away in September, Preferment is bred to stay the 3200m distance and is at good odds to join three of Zabeel's progeny (Efficient 2007, Jezabeel 1998, Might and Power 1997) as a winner of the Melbourne Cup. He is also trained by expatriate New Zealander Chris Waller and was bred in Cambridge by Mrs B M & L J Anselmi, Sir Patrick & Lady Hogan and Mrs H M & M J Moran.

The New Zealand-bred daughter of Darci Brahma is trained by former Matamata trainer John Sargent and is Sir Owen Glenn's second runner in Tuesday's race. She defeated Cox Plate winner Winx in the Australian Oaks in April this year.

Bred in Matamata by Rich Hill Stud, Prince of Penzance is an 80-1 outsider in the big race. Michelle Payne, the only female jockey in the race, takes the ride on Prince Of Penzance.