The Black Caps intend remaining cricket's nice guys in the three-Test series against Australia regardless of whether they receive a verbal barrage from the home side.

The first Test starts in Brisbane on Thursday week between a new-look Australian side led by rookie skipper Steve Smith and an in-form Black Caps outfit headed up by Brendon McCullum.

McCullum, who earned a Spirit of Cricket award at Lord's earlier in September, was critical of Smith's decision to appeal for Ben Stokes' wicket for obstructing the field during the recent ODI series between Australia and England.

That friction came after the Australians went after the New Zealanders with their chatter in their World Cup final win, after New Zealand's niceties in their pool game loss earlier in the tournament had made them uncomfortable. 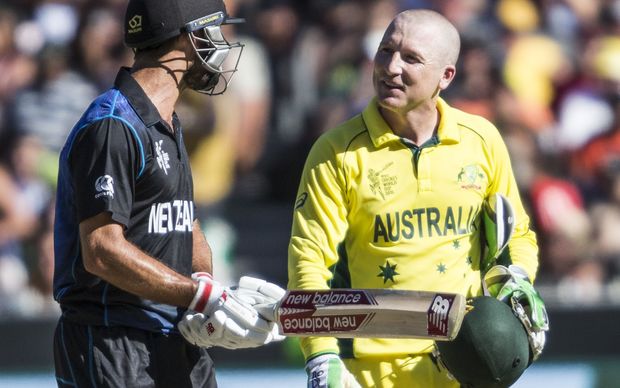 The new Australian vice-captain David Warner has toned down his aggressive approach in recent series and it remains to be seen how the home side under Smith will approach proceedings when the 'Gabba Test kicks off next week.

The visitors are presented with their best chance of a series win in Australia since Richard Hadlee's 1985 side.

However wicketkeeper BJ Watling said that doesn't mean they will up the stakes with their onfield chit-chat.

"We will keep playing the way that we play and deal with situations at the time really," he said.

"We will play our brand of cricket and they will play theirs so that's that."

However Watling said New Zealand were keen to exact some revenge for Australia's emphatic seven-wicket win in the World Cup final at the MCG in March.

"It was obviously disappointing to lose it," he said.

"But it is Test cricket now, not one day cricket, so we have three huge Tests we have to be up to and hopefully we can come out on top."

New Zealand round off their preparation for the Test series with a three-day match against an Australian XI at Blacktown starting on Thursday.