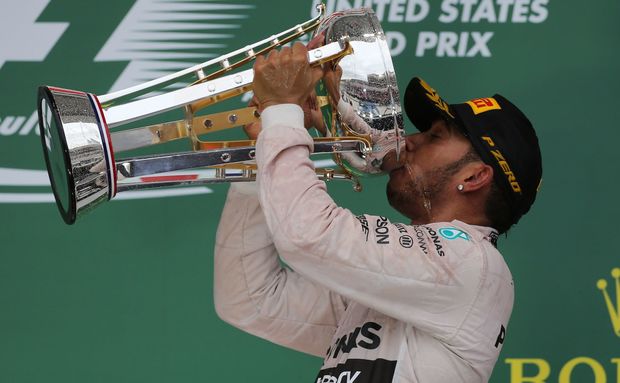 "That's the greatest moment of my life," he gasped over the team radio, choking back the tears, after crossing the line 2.8 seconds ahead of German team mate Nico Rosberg who had led before a late mistake.

The first British driver to win back-to-back titles, Hamilton realised a lifelong ambition to equal the tally of his boyhood idol Ayrton Senna, the Brazilian triple champion who died in 1994.

Ferrari's four-times champion Sebastian Vettel finished third, after starting 13th and fighting back to chase Rosberg nose-to-tail over the final lap with the crowd on the edge of their seats.

Had Vettel passed Rosberg, the celebrations for the 'double double' -- with Mercedes retaining their constructors' title two weeks ago in Russia -- would have remained on hold.

"I'm just overwhelmed," said Hamilton, who had needed to beat Vettel by nine points and Rosberg by two to take the crown with three races to spare. "There were so many times when I thought I had lost the race."

Before the podium ceremony, Hamilton tossed his team mate a cap to wear. The German threw it back in disgust. No words were necessary.

The victory on a rollercoaster afternoon was also Hamilton's third in the four grand prix's held in Austin and made the 30-year-old the first driver to win 10 or more races in successive seasons.

He was also only the second Briton since Jackie Stewart in 1973 to win three titles.

But for much of the race, on a drying track after torrential rain forced qualifying to be postponed from Saturday to Sunday morning, it had looked as if Hamilton would be kept waiting to realise his dream.

He had seized the lead at the start, banging wheels with Rosberg at the first corner and forcing his team mate wide and down to fourth place.

Hamilton could not pull away from the chasing Red Bulls however, with Australian Daniel Ricciardo taking the lead with 15 laps gone.

The Briton then dropped down to fourth place, with Rosberg back in the lead after 22 laps following the pitstops, but the first of two safety car deployments brought everything back into play.

Rosberg was heading for victory when, seven laps from the end, he made an unforced error, ran wide, and Hamilton seized his opportunity.