MotoGP championship leader Valentino Rossi will start the season finale in Valencia from the back of the grid after the Italian was penalised for clashing with Marc Marquez at the Malaysian Grand Prix. 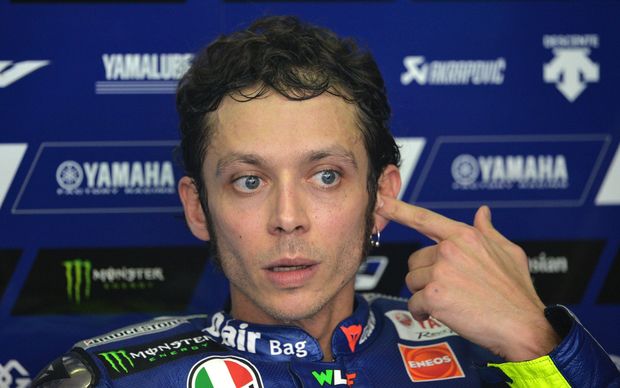 Dani Pedrosa claimed a dominant victory at Sepang and was followed home by Rossi's Yamaha team mate Jorge Lorenzo, who has closed the gap on his championship rival to seven points ahead of the decider in Spain in two weeks' time.

Rossi finished third but had an anxious wait to see if he would keep the points after making enough contact with Marquez to send the Spaniard spinning into the gravel on the eighth lap.

After an inquiry, Race Direction opted against docking the seven-time premier class champion any points but imposed a "three point penalty" that will see him start at the back of the field in Valencia.

The Yamaha team have appealed the decision.

Prior to the race, Rossi had claimed former champion Marquez wanted fellow Spaniard Lorenzo to win the championship instead of him and the simmering relationship between the pair boiled over at the Sepang International Circuit.

The duo darted into corners trying to get the upper hand, swapping places and touching wheels a number of times until Rossi slowed at Turn 14, forced Marquez wide and then flicked out a knee, which resulted in his rival's Honda sliding into the gravel.

Rossi said it was a racing incident and regretted his rival had crashed out.

"You know unfortunately I lose a lot of time with Marc and in Turn 14 I tried to go wide to get a better line to make him slow because he just rides to cause me some problems," MotoGP's official site quoted Rossi as saying.

"Unfortunately he came to me and I think he crashed in that moment. It's a shame because I think that in a normal race we can stay and fight with Jorge and we lost some more points.

"In Valencia, will be more difficult," he added, looking ahead to the season-ending race on Nov. 8.

By avoiding disqualification, Rossi remains on 312 points ahead of the Valencia Grand Prix, seven ahead of Lorenzo with 25 available for victory in Spain.