The New Zealand rally driver Hayden Paddon is in a tie for 7th place after the penultimate day of racing in the Rally of Spain. 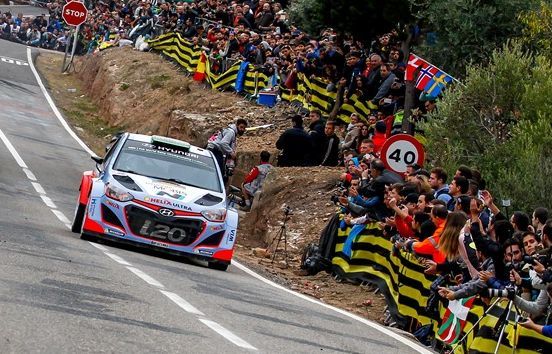 The Hyundai of Hayden Paddon on the Rally of Spain, 2015. Photo: McKlein Images

Paddon demonstrated his improving pace on tarmac by setting the fastest split time during the morning's final stage, but overall he lost valuable seconds in his push for the top-five places due to two separate punctures on stages 10 and 15

"The punctures cost us a good 20 seconds; it's a little frustrating as they were self-inflicted from hitting rocks on the insides of corners, so I've only myself to blame," said Paddon.

The 28 year old will go into the final days racing tied with his Hyundai Motorsport team-mate Thierry Neuville, and 1 minute 56 seconds behind the rally leader Sebastien Ogier.

"Even with my issues today, to be level with Thierry is very encouraging," said Paddon