Four debutants will get a chance to play for the New Zealand men's rugby league side in their England tour opener against Leeds on Saturday morning.

The tour warm-up game against the Rhinos will see Tuimoala Lolohea don the No.7 jersey, while utility back Jordan Kahu will line up in the centres. 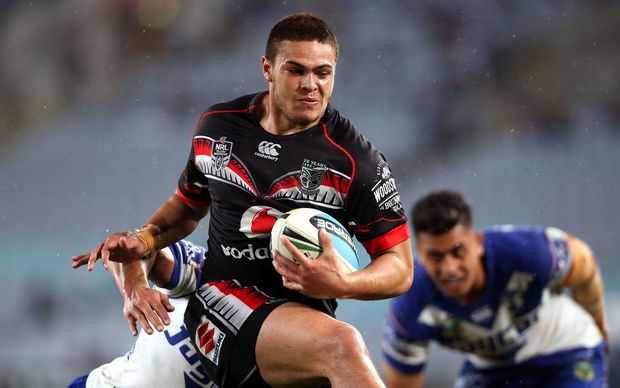 Tuimoala Lolohea in action for the Warriors against the Bulldogs Photo: Photosport

Forwards Kodi Nikorima and Sio Siua Taukeiaho are set to come off the bench against the English triple-crown winners.

Kiwis coach Stephen Kearney has named 20 players and both sides will run extended 19-man rotations for the game, which will double as a hit-out for the Kiwis ahead of their three-Test series against England and a celebration for Leeds after their tremendously successful domestic campaign.

Kearney said his new halves pairing of Lolohea and Hiku will be an opportunity for the pair to build combinations with the group around them.

"We also have guys that haven't played since the last round of the NRL, so this is a chance for them to blow out some cobwebs," Kearney said.

Leeds have taken out the League Leaders Shield, Challenge Cup and Super League Trophy this season, and will present a tough proposition for the visitors, even with three of their stars on duty with the England squad.

This game will also mark the final appearances of stalwarts Jamie Peacock, Kevin Sinfield and Kylie Leuluai for Leeds, who have also brought former Rhinos Ali Lauitiiti and Adrian Morley back to the club for the occasion.

"This will be perfect preparation for us," Kearney said. "Leeds will be honouring some pretty special players and they're expecting a full house."

"We're very aware of the history of this match, with the 1907 All Golds playing Leeds in their build-up to a test series, so for me, this is an historic occasion in that sense too."

Local officials are indeed predicting a sell-out at Headingley Carnegie.